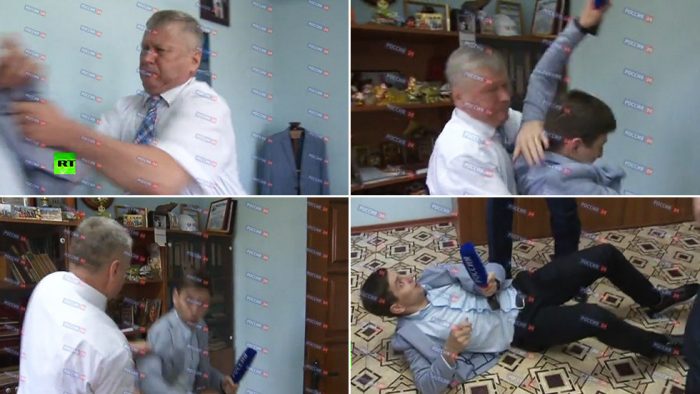 The head of a district in the Siberian region of Khakassia is undergoing federal investigation after being caught on camera grabbing a reporter from state news channel Rossiya 24.

“Authorities are pursuing a charge punishable by up to six years in prison for the head of the Shirinsky district, Sergei Zaitsev,’’ the Investigative Committee said in a statement on Monday.

The news channel reported that the ruling political party, United Russia, of which Zaitsev is a member, issued an apology,
describing the incident as an ugly scene.

Meanwhile, the reporter had intended to ask Zaitsev about shortcomings in government-funded housing for local residents
whose homes had been destroyed in wildfires.

“Why the hell have you come here?’’ Zaitsev said as he gets up from his desk to push the reporter out of his office, as seen in the video.

“Why are you pushing me? the reporter asked.

Zaitsev circled behind the reporter, slightly lifted him up and threw him to the floor.

“You dirty expletive,’’ Zaitsev said, in footage edited by state media to bleep out the insult.

The statement said that investigators have opened a case against Zaitsev on a charge of “`obstruction of the lawful
professional activities of journalists, committed by a person using his official position, combined with violence against
a journalist.’’ NAN, dpa reported.