2 killed, 15 injured as knife-wielding man goes on the rampage in Tokyo 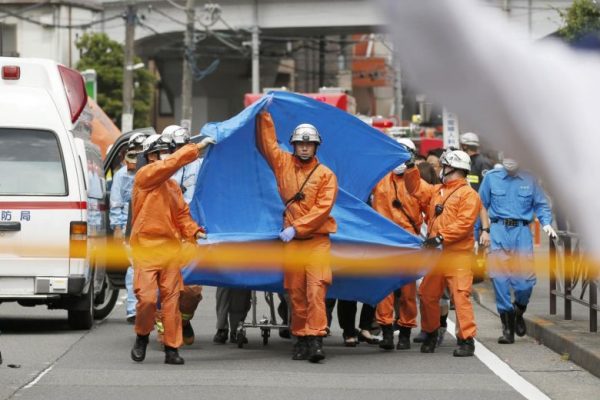 Rescue workers at the scene of the mass stabbing at a bus stop in Greater Tokyo. Photo Straitstimes

A knife-wielding man went on the rampage in Greater Tokyo Tuesday as he attacked school girls awaiting to board a bus.One girl and a man died and 15 other girls were injured, in the mass stabbing described by Japanese Prime Minister as ‘harrowing’.

A 12-year-old girl and a man in his 30s were pronounced dead after they were taken to hospital, officials told a news conference.

Of the 15 girls injured, three 6-year-olds were badly injured and one woman in her 40s received severe injuries, another hospital official said.

The girls were attacked while waiting for a school bus near Noborito Station in the city of Kawasaki next to Tokyo, Kyodo News agency reported citing local authorities.

A man in his 50s, who was in police custody but unconscious after stabbing himself in the neck, died in hospital, Kyodo said, adding that police found two knives at the scene of the attack.

“It is a very harrowing case. I feel strong anger. I offer my heartfelt condolences to the victims and hope the injured recover quickly,” Mr Abe said in a televised reaction, his first since the attack.

NHK, Japan’s public broadcaster, reported that most of the children were girls between the ages of six and seven.

Mr Toshichika Ishii, 57, was sitting on a park bench near where the attack took place when he heard a child scream, “I’m scared,” and heard the attacker shouting in Japanese, “I’m going to kill you!”

The attack took place as the children were at the bus stop waiting for a ride to Caritas, a local Catholic school, witnesses said.

Caritas is a private institution run by Canadian missionaries, the only Catholic school in Kawasaki.

It was founded in 1961 as a junior and senior high school. In 1963, it added elementary classes.

After the attack, a steady stream of children were escorted away from Caritas by their parents, who had been told by school officials not to talk to reporters.

The rampage was a rare attack in a country with one of the lowest rates of violent crime in the developed world and there was no immediate detail on the motive of the knifeman.