Ajimobi won't handover to PDP's Seyi Makinde on May 29 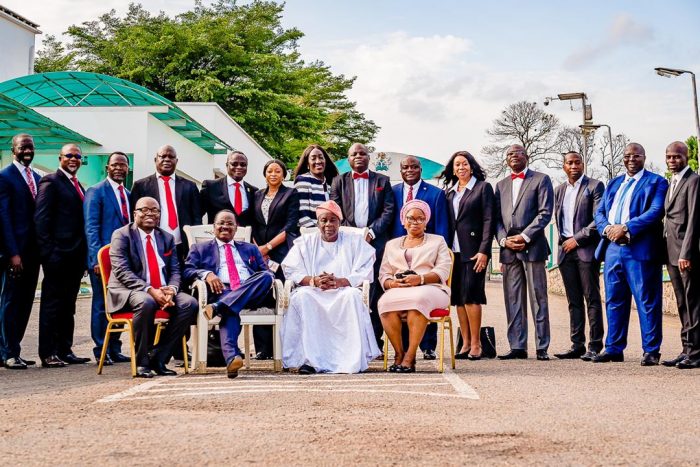 Governor Abiola Ajimobi in group photograph with his kitchen cabinet

Oyo State Governor, Abiola Ajimobi will not be there on Wednesday to handover to the Oyo State governor-elect, Seyi Makinde.

This is because the governor is expected to proceed to Saudi Arabia for Lesser Hajj on Tuesday May 28, 2019.

The governor, however, on Mondayheld a valedictory Executive Council meeting with his commissioners and special advisers, where he ask them to hold their head high for being a part of his historic and impactful two-term tenure.

Similarly, he said that indigenes of the state at home and in the Diaspora should be proud to identify with the new Oyo State, stemming from the transformational impact his administration had made on the state.

The governor said this in his closing remarks at the last EXCO meeting, held at the Executive Chambers of his office.

The meeting, which was the 205th of its kind under Ajimobi-led administration gave members the opportunity to reminisce on the journey so far with the governor, with few having being appointed since 2011.

The governor said the state that had hitherto been known for negative occurrences, which had made it a pariah in the comity of states of the federation and for which indigenes were not proud to be associated with it.

Ajimobi said, “The history of Oyo State had hitherto been replete with brigandage, thuggery, violence and other things antithetical to development, to the extent that most indigenes were ashamed to be called so. They found it unworthy to be associated with their own state of origin. But, today, we can say God has done wonderfully well with us by assisting us to successfully turn around its fortunes.

“Our eight years in the saddle have been very eventful. We came, we saw and I can boastfully say we have achieved. We came with a development principle that we called the pyramid of development, where we considered security and infrastructure as pivotal. The infrastructure implies social and physical infrastructural facilities that spanned roads, education, agriculture, commerce, tourism and other aspects of life that people can now feel.

“To all these, we have been very committed and we can today beat our chests and say we have restored the glory of Oyo State. We have returned the state back to the top level among the comity of modern, developed States. We met Oyo State in bricks and we are leaving it in marbles”.

Ajimobi appreciated members of his cabinet for standing firm with his administration and giving their best to ensure effective delivery of good governance, which he said the state never experienced before he became the governor.

The governor also thanked the people of the state for their support to the government and for believing in him by making him the first governor to be voted for second term in office.

In his remarks, the Deputy Governor, Chief Moses Adeyemo, thanked the governor for giving members of the cabinet the chance to be part of the team that had transformed the state, adding that the knowledge garnered under the governor would be put to better use in their different endeavors.

Secretary to the State Government, Mr Olalekan Alli, said that the cabinet held 205 Executive Council meetings, during when 165 decisions were taken, which resulted into 1085 state projects in the eight years of Ajimobi’s administration.

He lauded the governor and members of cabinet for raising the bar of governance in the state in areas of agriculture, security, commerce and particularly efficiency, which he described as new field to all the states except the Federal Government that initiated it.