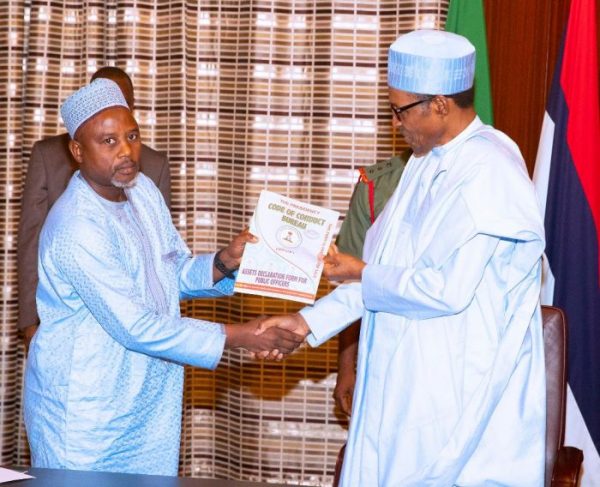 President Muhammadu Buhari being presented with Assets declaration form by the Chairman of Code of Conduct, Prof Mohammed Isah during an audience at the State House on 27 May. Photo State House

President Muhammadu Buhari has in compliance with the constitution of the Federal Republic of Nigeria, submitted his assets declaration forms to the Code of Conduct Bureau (CCB), with no significant changes in assets as declared in 2015, when he said he had N30m, five homes and 270 heads of cattle.

Garba Shehu, Senior Special Assistant to the President, Media and Publicity, said the president has submitted his forms in compliance with the law that asset declaration must precede his oath-taking slated for Wednesday.

According to Garba, the forms, as signed by the President and sworn to before a Judge of the Abuja High Court, showed no significant changes in assets as declared in 2015 by him.

The implication is that the President’s assets have not significantly changed than he declared in 2015.

He also had only one bank account, with the Union Bank, five homes, and two mud houses in Daura He declared two undeveloped plots of land, one in Kano and the other in Port Harcourt.

He also declared having farms, an orchard and a ranch.

The total number of his holdings in the farm include 270 heads of cattle, 25 sheep, five horses, a variety of birds and a number of economic trees”.

He declared ownership of a number of cars, two of which he bought from his savings and the others supplied to him by the Federal Government in his capacity as former Head of State. The rest were donated to him by well-wishers after his jeep was damaged in a Boko Haram bomb attack on his convoy in July 2014.

President Buhari “had shares in Berger Paints, Union Bank and Skye Bank, which ran into crisis and has now been salvaged as  Polaris Bank.

President Buhari’s new asset forms were submitted to the Chairman of the CCB, Prof. Mohammed Isa, on behalf of the president by Sarki Abba, Senior Special Assistant, Household and Domestic Affairs.

“The Chairman of the CCB commended the President for leading by example by declaring his assets in accordance with the law.”