Buhari to Saraki, Dogara: You are not patriotic 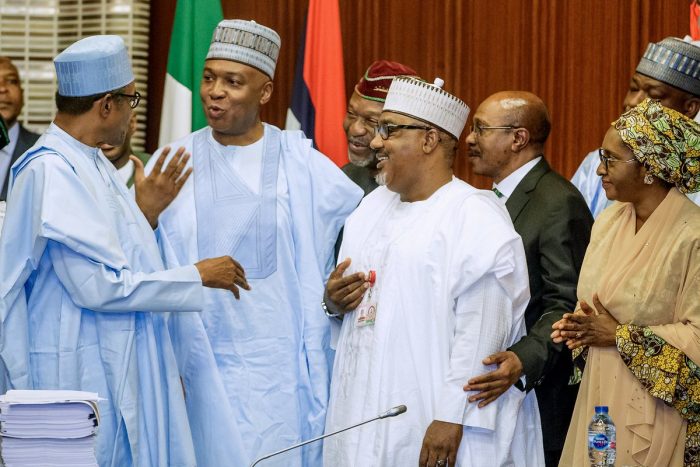 Buhari says he told Saraki, second left that he and Dogara are not patriotic over budget delays

President Muhammadu Buhari On Monday in Abuja said he would make police and judiciary more efficient in his second term as he also criticised outgoing senate president Bukola Saraki and speaker Yakubu Dogara for delaying budget passage during his first term.

Buhari said this on Monday in Abuja in an NTA special interview.

He described as unpatriotic the action of the two principal officers of the National Assembly over the years.

He rated both Saraki and Dogara, “very very low” over the budget delays.
Watch the full Interview on NTA:

“I told Saraki and Dogara that by holding the budget for 7 months, you’re not hurting me, you’re hurting Nigerians? In terms of patriotism, I rate them very very low,” Buhari said on Monday night.

“ I feel very bad indeed. NASS to hold the Budget for seven months,“ he said.

Buhari said he would reform both the judiciary and the police to ensure effective administration.

“Police and judiciary are to be in frontline of law and order. They should be able to know the offender in their communities.

“What the government needs to do is to provide the basic need. People should try to expose criminals in their communities, “ he said.

Buhari hailed Nigerians for their love, respect and trust in him.

He commended them for finding him worthy to rule for the second term in the office.

Buhari linked the secret of love, respect and trust he enjoyed from Nigerian citizens to his hard work to survive in life.

He further promised that he would continue to do his best towards national security.

He noted that his coming to power in 2015 was a relief to North-East of the country because there was reduction of activities of Boko Haram in the region.

He said the administration had ensured food security by making fertiliser available and affordable for the farmers.

He said the present administration had worked tirelessly to recover looted money from banks in Europe and U.S.

He explained that the recovery was a gradual process by investigation.

He said government was intensifying effort to fix roads, improve power and other infrastructure to make the business booming as well as encourage foreigners to invest in the country