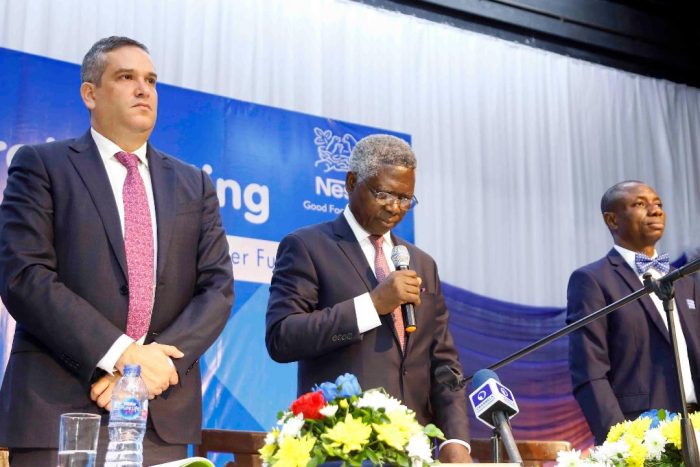 Nestle Nigeria PLC has declared a revenue of N 71.0 billion for the first quarter of 2019, recording a growth of 5.2% over the previous year. Gross profit for the period stood at N 31.5 billion, compared to N25.8 billion during the previous year.

The company posted a net profit of N 12.8 billion as compared to N 8.6 billion during same period of the previous year.

The company posted N 60.6 billion as results from operating activities in 2018 vs N 55.7 billion during the previous year; while its profit stood at N43 billion, compared to N33 billion recorded in 2017.

Nestle Nigeria PLC has now been listed on the Nigeria Stock Exchange for the 40th year.

The company, in a statement by its Managing Director, Mr. Mauricio Alarcon, said the organisation is pleased with the result achieved.

Alarcon also attributed the result achieved to the loyalty of customers and consistent delivery of quality on the part of the organization.

He said: ”We are pleased with the sustained growth of our company, the loyalty of our customers and the discipline and dedication of our people to provide tastier and healthier foods and beverages.”

The meeting became interesting when the floor was opened to the shareholders to give their opinions on the results achieved and the way forward.

It started with Mr Sunny Nwosu who showered praises on the management for the massive revenue declared and 13,000 farmers empowered. He advised that more should be done in terms of empowerment so as to increase the export capacity of farm products.

He disapproved of the omission of stakeholders’ pictures in the annual report. He described the act as a ”great omission” which shows some negligence on the part of the planning committee.

Mr Nwosu and some of his colleagues also frowned at some of the regulations made by SEC ( Security and Exchange Commision). He counselled the Nestle Board to ensure they checkmate and disapprove any stringent regulation against shareholders.

Pastor (Mrs) Pitan of the Pragmatic shareholder organisation lamented the packaged gift from Nestle at her Golden Jubilee meeting.

Another stakeholder, who introduced himself as Nosa, called for the appointment of a Nigerian to the position of CEO, an opinion which was well accepted by the audience and accompanied with cheers.

Mr Nosa also demanded for bonus in profits as a gift for the golden jubilee celebration.

Mrs Bisi Akande, who introduced herself as the National Chairman of Pragmatic Shareholder Organization questioned the massive and juicy increase in the money budgeted to the executives of the organization, stressing that same should reflect in the profit of shareholders.

Timothy Adesina, Patron of the shareholders appreciated all that was done by the management and urged them to do more.

Reacting to some of the questions raised, the chairman urged shareholders to embrace the positives achieved by the organization.

He noted that the organization has done well despite severe economic challenges, adding that the company has given its shareholders the best above other competitors.

He said all the positives and shortcomings have been noted and will be reviewed appropriately.