Obi to Amaechi: You're irrelevant to comment who becomes President in 2023 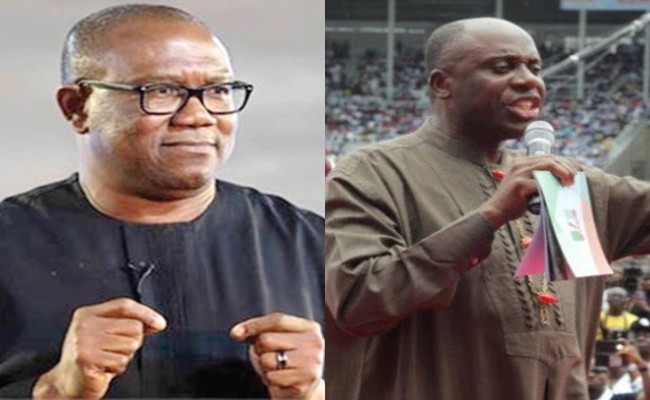 The Peoples Democratic Party, PDP, Vice Presidential candidate in the last election and former Anambra State Governor,  Mr Peter Obi has declared that the Minister of Transportation,  Chibuike Rotimi Amaechi lacked the competence to talk about which geo-political zone produce the President in 2023.

Addressing journalists after a lecture/book presentation  in honour of Rivers State Governor,  Nyesom Ezenwo Wike in Port Harcourt on Monday,  Obi wondered why Amaechi who is not from South East would want to speak for the zone.
Flanked by Senator Uche Ekwunife and Senator-elect,  Sandy Onoh,  Obi said: “Amaechi is not from the South East, so he cannot  speak for us.  He is not in any position  to make such statement because even him that is in APC, he did not contribute anything to the success of that election.
“He did not even achieve  anything  in his own state.  Those of us from the South East who are from the PDP contributed to the success of our party”.
The former  Anambra State Governor added: “For example,  PDP in my state got 95 percent. They (APC) didn’t  even get 25 percent in Rivers State.  So he is not competent to speak on the Presidency in 2023”.
On the second  term inauguration of Wike, he said that the governor had performed exceptionally well, as evidenced by his numerous projects.
He said: “What is happening  in Rivers State is that every area has seen very visible improvement.  He has done very well. The lecture and book presentation elucidated the performance  of the Rivers State Governor “.
On the growing insecurity in the country, Obi said the only way to achieve peace was for the Buhari Administration to unite the people and tackle insecurity headlong.
“Everybody has to be involved. The President has to work with the governors and the governors should work with the local government councils. We are Nigerians.  We have no other country,  so everyone must be involved,” he said.
Obi said that the major way to end insecurity  was to create jobs for the teeming unemployed youths.
He said: “As Long as the youths remain unemployed,  we have a crisis.”
The Former Anambra governor said that INEC should be made to be independent, so that it could work without favouring any group.
Tags:   Amaechi   Obi   President