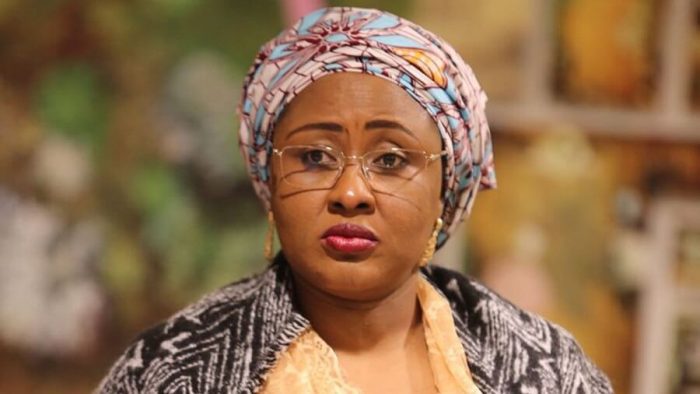 The wife of the President, Aisha Buhari, has called for the arrest and prosecution of perpetrators of drug trafficking conspiracy which led to the detention of Zainab Aliyu in Saudi Arabia.

Mrs Buhari made the call on Monday when the victim of the drug trafficking conspiracy, Zainab Aliyu, was led to the Presidential Villa by her Parents to break the Ramadan fast with the wife of the President in Abuja.

Zainab, who was travelling to Saudi Arabia from the Mallam Aminu Kano International Airport, was implicated by drug cartels operating at the airport.

She, however, regained her freedom after the Saudi authorities discovered she was innocent of the crime, following intervention of the Federal Government and President Muhammadu Buhari.

The wife of the President, therefore, called on intending air travelers to be mindful and careful to avoid falling victims.

While fielding questions from State House Correspondents, the victim Miss Zainab Aliyu, called on the Nigerian authorities to ensure that those engaged in the act were prosecuted according to laid down procedure.

” I want to thank the wife of the President for inviting us to break our fast with her and Nigerians for their prayers and efforts to ensure my release.

” Though, I felt very bad that the cartel, who masterminded this act to me were granted bail because they have to be punished for what they did to me to serve as deterrent to others.

” So, I will like to call on Nigerian authorities to punish the cartel,” she said.

On her part, the Senior Special Assistant to the President on Foreign and Diaspora Affairs, Mrs Abike Dabiri-Erewa, expressed her appreciation to the wife of the President for hosting the lucky family to breaking of Ramadan fast.

Dabiri-Erewa said the wife of the President exhibited motherly love for the freed victim during and after her release.

” Personally, since we started the struggle, I did not spend money throughout the period, so I thank everybody who contributed to the release of my daughter.

” I feel sad that the cartel, who perpetrated this act were granted bail, they even undermined the government because as I speak to you one of them was allowed to perform lesser hajj and he returned to Nigeria.

” Yes, the offence is bailable but there are stringent conditions that should be attached to serve as deterrent.

” And to my surprise, the perpetrators have not shown any remorse for committing the act, for day one, one of them knelt down and held my leg saying that she was doing it for a living.

“So, you can imagine she’s living at the detriment of someone’s life” he said.