Shettima bucks the trend, hands over to successor Zulum 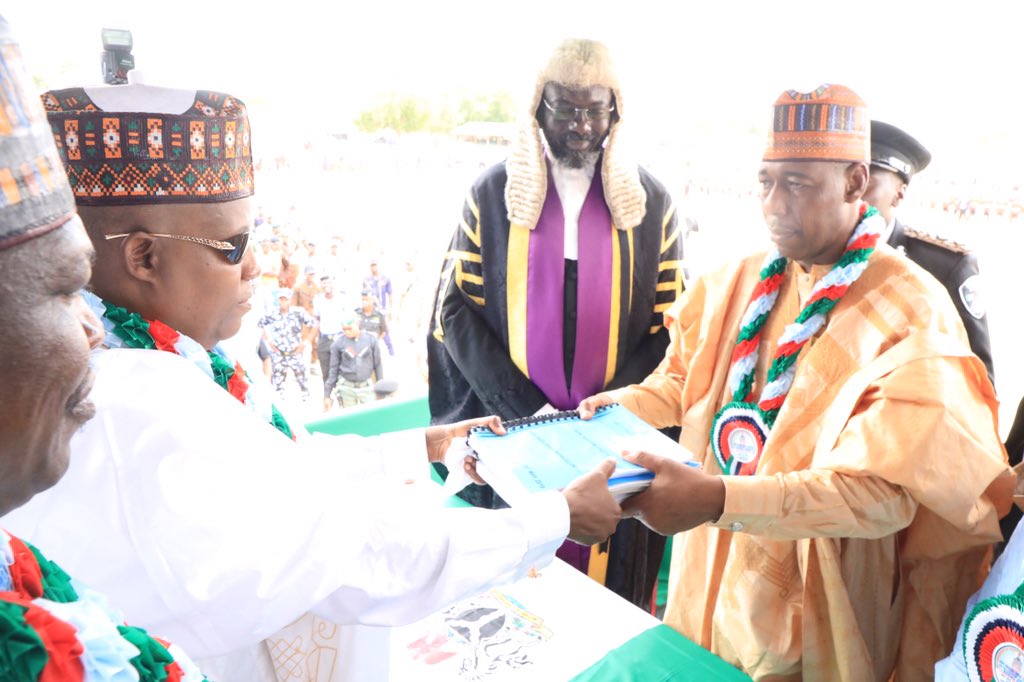 Former governor of Borno, Kashim Shettima bucked the trend of bad behaviour by Nigerian politicians by staying till today to hand over to his successor Prof. Babagana Zulum at a colourful event in Maiduguri.

Reports from many states showed the departed governors not waiting to do a proper handover to their successors on the inauguration today. In Ogun state, former governor Ibikunle Amosun failed to hand over to his successor Governor Dapo Abiodun. Instead, the secretary to the state government did the handing over to the new deputy governor Noimot Oyedele.

Former Oyo governor Abiola Ajimobi publicly ruled out not being around to hand over to PDP successor Seyi Makinde.

Shettima behaved differently and even read a speech at the event, when Zulum took the oath of office alongside his deputy, Alhaji Umar Kadafur.

The oath of office was administered by the state’s Chief Judge, Justice Kashim Zanna, in a ceremony attended by thousands of jubilant residents of Maiduguri, community leaders and other top government officials.

Shettima said he was delighted to hand over the mantle of leadership to an outstanding and competent personality who possessed the qualities to move the state forward.

Shettima noted that Zulum has the understanding of the development nexus to fast track rehabilitation, reconstruction and resettlement process of the state.

He expressed optimism that the new governor would initiate viable programmes to address the devastation caused by Boko Haram insurgency and move the state forward.

Kashim called on people of the state to support the new administration to enable it serve the people better.

He lauded President Muhammad Buhari, people of the state, community and religious leaders for their support to his administration in the past eight years.

Kashim commended the military, police and security agencies over the successes recorded in the counter insurgency campaign.

In his maiden address, Zulum promised to implement a 10-point agenda to fast track rapid social and economic development of the state.

Zulum said his administration would accord priority attention to security of lives and property as well as food security programme.

Zulum said he would establish a ministry of science and technology to facilitate application of modern technologies in intelligent information gathering and sharing.

He disclosed that his administration would also adopt practical measures to address youth restiveness, thuggery and idleness among the youth and women.

Zulum also pledged to reinvigorate agriculture, health and education sector of the state.
The governor promised to promote unity and work with all stakeholders for the development of the state.

NAN reports that the ceremony was attended by former governors of the state, Sen. Maina Maji and Alsheikh Jarma and Nigeria’s Ambassador to China, Amb. Baba Jiddah.

The Shehu of Borno, Alhaji Abubakar Garbai Elkanemi, members of national and state house of assembly, community and religious leaders as well as heads of military, police and other security agencies, also attended the event. (NAN)