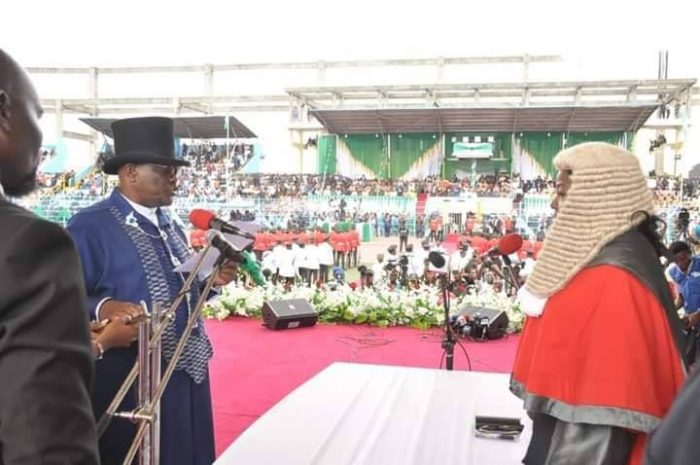 Nyesom Ezenwo Wike, re-elected Governor of Rivers State, on Wednesday, in the presence of thousands of Rivers people and other prominent Nigerians, took the oath of office to commence his second term.

Also on Wednesday, Deputy Governor Ipalibo Harry Banigo was sworn in for a second term.

Chief Judge of Rivers State, Justice Adama Iyaye-Laminkara administered the oath of office for the Rivers State Governor and his Deputy.

The swearing-in ceremony which took place at the Yakubu Gowon Stadium in Port Harcourt was a huge celebration as the arrival of Governor Wike was greeted by jubilation by the capacity crowd.

After mounting the saluting dais for the ceremonial police rituals, Governor Wike drove in the ceremonial open roof Land Rover Utility Vehicle to exchange pleasantries with the jubilant crowd.

In an inauguration address, Rivers State Governor, Nyesom Ezenwo Wike declared that he will always place Rivers State first in all his actions.

He said: “For us, in all things it is Rivers State first; Rivers State is the measure; Rivers State before others. This is the essence of the political mandate and burden that we will bear for the next four years and we will not disappoint you.

“We will continue to stand up for Rivers State and defend her interest, no matter the challenges or what comes at us”.

The Governor said that his administration is not in opposition to the Federal Government, calling for partnership to move Rivers State and Nigeria forward.

He said: ” But we are not a conquered people and we will never surrender our freedoms to any body or entity, whether internal or external. We will therefore not accept to be subjugated to a headmaster and pupil power relationship; neither will we abandon the collective interest of Rivers State for the sake of political expediency.

“We are for the rule of law, democracy and mutual respect as autonomous State entities and co-building blocks of the Nigerian federation”.

Wike thanked the good people of Rivers State, especially the voters, for their trust and support that led to the mandate to serve the state for another four years.

He thanked leaders of the state, political leaders, Traditional Rulers, the clergy, women and youth groups for their unwavering support.

He said: “For us, everyone counts and we must not allow ourselves to be divided between upland and riverine considerations but strive for common grounds, solidarity and work together towards achieving our common goals and aspirations.

“Our refrain at this time, and especially in the face of the social and economic uncertainties in our nation, should be: ask what you can do for Rivers State instead of what Rivers State can do for you.

“The future of our State depends on us. It is up to us to renew, re-energize, and advance the Rivers dream, to fight for what belongs to us, and to defend our right to exist in freedom, security and peace in our own nation. And if we do cooperate, think and act among ourselves with tenacity and unity of strength, purpose and commitment, then there is no mountain we cannot level; no river we cannot cross, and no goal we set for ourselves that we cannot achieve.”

Outlining the direction of his administration for the next four years , Governor Wike pledged to consolidate on his first term achievements and make Rivers State, the greatest state in the country.

He said: ” Our economy is great but it should be greater and made more beneficial to all. And so we will continue to grow our economy, expand our tax base, provide a friendly business environment and attract foreign and local investments to create more jobs and empower our people.

“We will continue on the economic trajectory of fiscal discipline, prudence, prioritization of capital projects over recurrent and giving value for money spent in the delivery of services.

“We know we are developing, but it’s better and more result-oriented if approached in an organized and strategic form.We will therefore adopt a holistic approach to development by partnering with relevant national and international agencies and expertise to initiate and implement a 25-years Marshall Plan for economic transformation and development to guide and accelerate the future development of our State”.

Wike spelt out key areas that will will witness remarkable improvements under his leadership during his second term.

He said that the administration would continue with the provision of quality road network, bridges and prioritize the development of more social amenities, schools, health facilities, water and sanitation, electricity, land reclamation and preservation of natural resources.

“For too long, we have relied mostly on a single vanishing revenue source to fund our development. The reality is that we cannot continue in this economic folly lest we remain forever vulnerable to the ripples, uncertainties and miseries of the mono-product based national economy. Apart from oil and gas, Rivers State also has a vast agricultural potential, which has remained largely untapped for decades.

“For us therefore, it is about time we embraced the green revolution as a strategic measure for achieving economic diversification, job creation and food security for the State and our people, and we are just ready to do that.

“Our role in this regard will span from granting interest free loans to providing training, land preparation and logistical support to our willing youths to invest in commercial agriculture and allied businesses”, he said.

Wike particularly announced that his administration would construct flyovers at Rumuokoro, Garrison and Artillery in Port Harcourt.

Wike assured that youth development will take centre stage during his second term.

He said: “We’ve got good news for all our youths this time around as we will dedicate much of the next four years to Youth Development by tackling the challenges that continue to keep you behind. As a starting point, we’ve resolved to give our youths some significant positions in our government and provide viable economic opportunities to spark hopes of a better future in their eyes.

“Let me also assure you that those who need education will get quality one; those who want life-skills will be trained; those who want to do business will continue to get our interest free loans; and those who have sporting talents will have quality sporting facilities and encouragement from us; and for those interested in making a career out of football, we have provided the Real Madrid Academy to prepare you for life-transforming professional footballing careers at home and abroad”.

Wike noted that Education and Health Development will be given priority attention during his second term.

“I wish to assure us that we are determined to change this narrative for the better. We will continue to equip our public schools and ensure our children have access to quality learning experience; empower our teachers with modern teaching skills to deliver better outcomes in the classrooms, and advance our universities to equip and prepare our graduates to be competitive and strive for creativity, self-reliance and service.

“We believe that quality healthcare should be available and affordable to every citizen as of right and this is what we are working hard to achieve with our efforts and commitment to fix the existing shortcomings in the State’s healthcare system.To this end, we hope to fully restore all the general hospitals, complete and equip the five zonal referral hospitals, fully upgrade the Rivers State University Teaching Hospital and provide more healthcare facilities to under-served areas of the State”.

He restated the ban on all forms of street trading and arbitrary creation of illegal motor parks and taxi ranks across the State.

“We will sanitize the transport sector and ensure that all commercial taxi and bus operators are duly registered with the State’s Ministry of Transport to safeguard the comfort, safety and security of commuters.

“We recognize the correlation between adequate security and the well being of our people. We all therefore deserve to be safe and secure in our homes, offices, business places, along our roads and in our neighbourhoods and inn our communities”, he said.

“What’s more, they have refused to accord adequate security attention to Rivers State in spite of the unprecedented support they receive from us in terms of provision of operational vehicles, armoured personnel carriers, gunboats, communication gazettes, fuel and overheads to the security agencies.

“Nevertheless, we thank the security agencies, especially the State Commands of the Police, the Department of State Security, the Nigerian Air force and the Nigerian Navy for the partnership and willingness to give their best to keep us safe and secure in spite of the seaming indifference and lack of tangible material support and encouragement from the Federal Government. Even now and going forward, we can only pray to them to depoliticize the provision of security in Rivers State because we are also Nigerians as other States and the preservation of our lives and property should equally matter to the Federal Government,” he said.

He announced that the Rivers State Government will operationalise the Neighbourhood Safety Corps Agency for the improved security of the State.

“I wish to emphasize that we will no longer tolerate those who continue to degrade and undermine our rights to live in a clean, healthy and safe environment.

“We are therefore minded to declare a state of emergency on the environment and tackle all forms of degradation, nuisance and irresponsible behavior occasioned by individuals, companies and other agencies, both public and private,” he said.

The governor noted that his administration used his first term to improve critical sectors of the State for the good of Rivers people.

“In the last four years, we have made historic investments in education, healthcare, security, and sports development.
Today, our economy is widely acclaimed as the fastest growing in the country with internally generated revenues projections and fiscal responsibility attaining record levels.

” We’ve eased the tax burden on investors; our economy is on upward spiral, creating jobs and attracting new investments from within and outside the State, pushing up property rates and creating new opportunities for existing and budding entrepreneurs.
We have rid all our roads of potholes, completed most of the abandoned road projects we inherited and built new ones, including dual carriageways across the State.

” For the first time in history, the ancient Opobo Kingdom, Ikuru town and other adjoining coastal communities have been linked to the rest of the State by road by our administration. We’ve also provided internal roads to a number of communities as well as regenerated some of our decaying neghbourhoods, including Diobu, Port Harcourt Township, Ogunabali and Amadi Ama.”

Wike called for cooperation from all groups of the state, irrespective of the political, ethnic and economic interests to join hands with his Administration for the development of the State.

He said: “We all need each other because everyone counts. We need ideas and contributions from everyone, irrespective of ethnic, party or religious affiliations and together, we can consolidate, target new heights and build the Rivers State that we all want to see now and in the future.

“We may be from different social, economic or political background, but the bottom-line is that we are all Rivers people with common aspirations and challenges and when we reflect on our shared values and responsibility to the State and our people, we will discover that we all stand to win by repudiating the politics of division, hatred and self-interest that constitute a drag on our collective progress”.

The governor assured Rivers people that he will serve them in humility and commitment to the development of the State.

He said: “I stand here today with a humble spirit, conscious of the enormous responsibility that you have again entrusted in us and confident in our potential and with God on our side, we will surely discharge our mandate to the benefit of all and leave our dear Rivers State better off than when we started four years ago”.