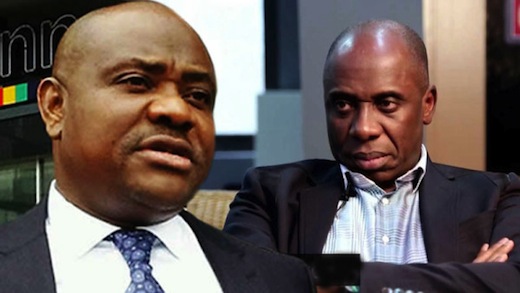 Rivers State Governor, Nyesom Wike has lashed out at former Minister of Transportation, Rotimi Amaechi, saying that his plans to de-market the state will fail and declared that the State is safe for productive economic activities for the empowerment of the people.

He described as unfortunate, the failed attempt by Amaechi to de-market the State on NTA Tuesday live, where the Former Rivers State Governor claimed that the Buhari administration could not extend railway to Rivers due to alleged insecurity.

He said: “Amaechi claimed on NTA Tuesday live that he did not bring the railway to Rivers State because of insecurity, what about Kaduna and Daura with very high level of insecurity, yet they took railway there.

“Just this week, the President met with the governors of 19 northern states and they discussed how to stem the tide of insecurity in the region. Yet they were not denied projects.

“For how long will Amaechi continue to de-market Rivers State. Was it insecurity that made him not to give the President 25 percent during the last elections? You claim Rivers State is insecure, but you came to the state to hold your birthday. Every Rivers indigene owes it a duty to protect the state”.

He said contrary to the false propaganda about insecurity, Rivers State has continued to grow her internally generated Revenue since 2015.

“Let nobody de-market Rivers State. This ugly politics will not work. We have not benefited anything from the APC Federal Government since 2015. They are refunding money for Federal projects, but they delisted Rivers State. But I will not bow to anyone, I will only continue to respect constituted authority “, he said.

Wike announced that competence and loyalty would drive the setting up of his second term cabinet. He said only persons with 100 percent loyalty will make the list.

The Governor assured that he will pay more attention to the masses through empowerment programmes.

He called on the governor to use his second term to promote the unity of Rivers people for the development of the State.

“Every inch of the journey from now on must be devoted to thanking God ceaselessly for what he did for our State. You have done so much, but there is still work to be done”, he said.

Odili urged Wike to devote more resources to empowering the less privileged during his second term. He said the governor must find a way of reaching the poor without passing through middlemen.

He advised Wike not to be distracted by political intrigue, as the race for 2023 has already started.

United States Consul-General in Nigeria, John Bray said he is very proud of Rivers people because of the role they played during the last elections.

He said that during the last elections Rivers people won despite the challenges of the period.

He said: “As I come from a democratic country, I am very proud of the Rivers people. During the last difficult elections, the people won. So, I raise my glass to you the people of Rivers”.

PDP National Chairman, Prince Uche Secondus said though Amaechi came with Army Generals to overrun the state, he was defeated by Rivers people.

Senator Dino Melaye commended Rivers people for voting a man of courage who believes in the defence of the Niger Delta. He said that Rivers people voted for a man who has conquered fear.

Ooni of Ife, Oba Adeyeye Enitan Ogunwusi praised Wike for his outstanding performance in his first term . He conferred on Wike the title of “Pride of Nigeria”.

Chairman of Rivers State Council of Traditional Rulers and Amayanabo of Opobo, King Douglas Dandeson Jaja said Wike has started his second term on a strong through key pronouncements on street trading and taxi parks.

Founder of AIT, Dr Raymond Dokpesi thanked Rivers people for standing solidly behind Wike during the last elections. He said Wike has become a role model in leadership across Nigeria.

“Without the outstanding performance of Governor Wike, it would have been impossible for the PDP to be alive in the country,” he said.