Madrid-bound Eden Hazard may have said goodbye to Chelsea 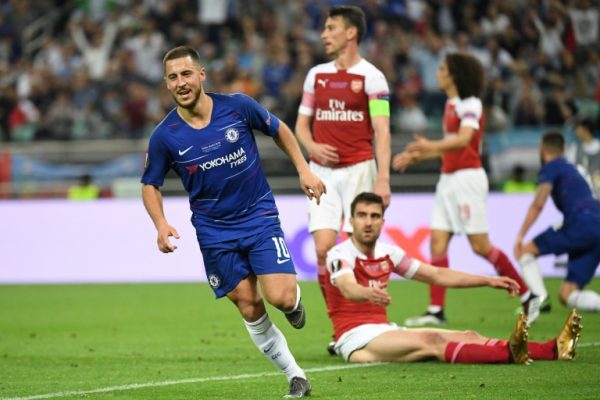 Eden Hazard scores a brace for Chelsea to ruin Arsenal

Eden Hazard scored twice and then admitted it was his parting gift as the Belgian’s brace helped Chelsea sweep away Arsenal to win 4-1 in the Europa League final in Baku.

This match started at 11pm local time on Wednesday in Azerbaijan, but it was Thursday by the time it came to life with a flood of second-half goals started by Olivier Giroud’s 49th-minute opener against his old club.

Hazard then set up Pedro Rodriguez for Chelsea’s second before grabbing a double of his own — including a penalty — either side of Alex Iwobi’s consolation for Arsenal.

The Belgian is widely expected to leave Chelsea for Real Madrid after seven years in England, and this was the perfect way for him to bow out.

“I think it is a goodbye, but in football you never know,” the 28 year-old told BT Sport. “My dream was to play in the Premier League and I have done that for one of the biggest clubs so maybe now it is the time for a new challenge.”

It is his, and Chelsea’s, second Europa League this decade, while it is Maurizio Sarri’s first major trophy as a coach.

“I am really very happy but the trophy is very important for the club,” Sarri said.

“In the Europa League we played 15 matches, won 12 and drew three, so I think we deserved to win it.”

Chelsea will be back in the Champions League next season, but there will be no return to Europe’s top table for Arsenal. Unai Emery’s side had to win here to qualify, yet they were not good enough on a bizarre night.

Emery was hoping to win this competition for the fourth time. He will get another chance next season, but for now Arsenal’s 25-year wait to bring back a European trophy to north London goes on.

“We tried and we worked but Chelsea were better than us and congratulations to them,” Emery said.

Chelsea will remember their evening with fondness, as will Sarri, who 24 hours earlier had stolen the headlines when he angrily stormed off the pitch here during a training session in front of the television cameras.

“Sarri is a great guy, a great coach and he deserves this,” said David Luiz of his coach.

The few Chelsea supporters who came will not forget their night, but the fact there were reportedly only around 1,300 in Azerbaijan will be a source of regret for the club.

UEFA’s decision to play the game here had been heavily criticised, with the difficulty and cost of coming to the shores of the Caspian Sea preventing many fans from travelling and meaning Arsenal’s Armenian midfielder Henrikh Mkhitaryan was controversially absent.

Azerbaijan’s President Ilham Aliyev was in the crowd, but there were thousands of empty seats in a stadium which holds almost 70,000.

That meant that, far away from the blood and thunder of a typical derby fixture, this had the feel of an end-of-season exhibition match on a foreign tour, for much of the first half anyway.

The players seemed short of rhythm in a match played two and a half weeks after the Premier League season ended.

It came to life though, with a moment of controversy when referee Gianluca Rocchi dismissed Arsenal appeals for a penalty as Alexandre Lacazette went down under goalkeeper Kepa Arrizabalaga’s challenge.