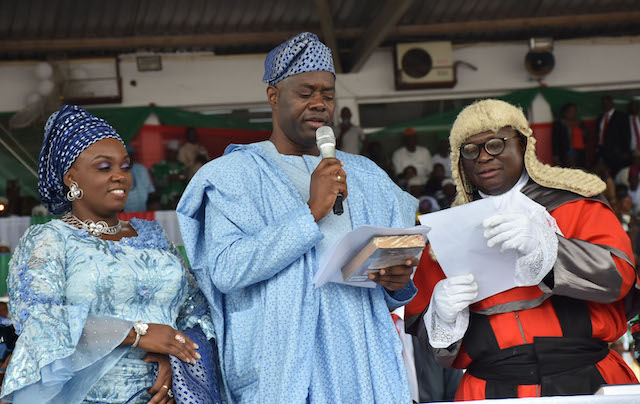 Pic 21. Gov Seyi Makinde of Oyo State (M) taking Oath of Office before Chief Judge of Oyo State, Justice Munta Abimbola, during his inauguration in Ibadan on Wednesday (29/5/19). With them is his wife, Mrs Omini Makinde.

Seyi Makinde, the new Governor of Oyo State, has told civil servants in the state not to expect immediate payment of the new minimum wage.

Makinde said this while giving his inauguration speech after being sworn-in to take the reins as Governor of the state.

He also said he would reduce the government overheads while increasing the efficiency in tax collection.

“Recently, the Federal Government announced a new salary scheme in which the lowest cadre of civil servants are expected to earn at least N30,000.

“I know how access to this type of money will improve the lives of many of the families that I have had direct contact with,” Makinde said.

He continued, “With the way the Oyo state account currently stands, I will be deceiving you if I said we are capable of taking on this burden.

“I believe in true federalism. I believe the states should decide the minimum wage of their workforce based on individual realities.

“All states are not created equal, so it is against the principle of fairness to apply a blanket rule to govern them all.”