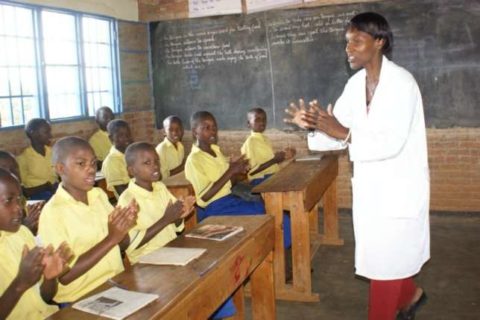 Teacher and her pupils

The Teachers Registration Council of Nigeria (TRCN) says it is set to hold the May diet of the Professional Qualifying Examination (PQE) for teachers nationwide between June 7 and 8.

The Registrar of the council, Prof. Josiah Ajiboye, said this during a world news briefing in Abuja on Friday.

Ajiboye said that no fewer than 30,000 prospective teachers would write the computer-based examination in 50 centres nationwide.
‎
“About 30,000 would-be teachers across the states of the federation and the FCT have registered for the examination.

”The examination would hold on Saturday, June 8 in all the states of the federation and the FCT except in states like Bauchi, Kaduna and Kano where the examination will start on Friday, June 7 because of the large number of candidates.

“Our technical officers are being prepared and have been trained in preparation for the examination.

“The examination, which was supposed to hold in May, was shifted from May 25 and 26 because of the National Environmental Sanitation Exercise,” he said.

Ajiboye said the PQE had become one of the benchmark processes for registering professional teachers in Nigeria.

He said the PQE was introduced in October 2017 and the May 2019 diet was the fourth in the series.

The TRCN boss said one of the aims of the examination was to get the teachers prepared technologically in the 21st century.

“Yes, it has provided a big experience for us because when we started, many people who took the exam were not computer literate, and that accounted for the large number of failure in the first exam in 2017.

”But progressively, teachers now know that since it is a CBT exam, they have to go for computer appreciation programme, and the result over the years have been improving,” he said.

He further said that the council recorded not less than 83 per cent pass nationwide in the last examination in 2018.

Ajiboye, however, said there was state by state disparity when the results were examined.

He said external people would serve as monitors and supervisors, including members of the governing council of TRCN, staff of the Ministry of Education, National Teachers Institute and National Commission for Colleges of Education.

Ajiboye reiterated that the deadline for flushing out unqualified teachers from the classroom remains Dec. 31, 2019.

According to him, the belief in the deadline has made the council to record an increase in the number of people going to take the May diet of the PQE .

“Presently, we have registered about 30,000 candidates.

“By January 2020, we are going to begin our enforcement and we may likely start from the private schools because our mandate covers both the public and private schools.

“We have more than 80 per cent compliance from public schools, but the major problem we have is the private schools.

“However, we are still appealing to all teachers to key into this directive,” he said.

The National Council on Education gave December 2019 as the deadline for any teacher who is not qualified, registered and licensed by TRCN to be removed from the classroom.