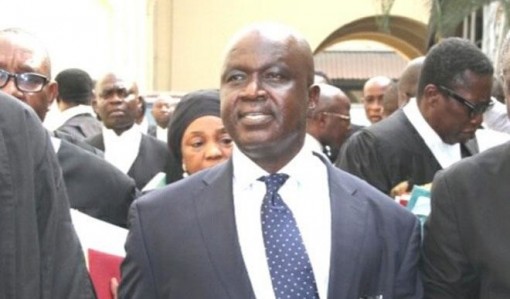 Tarfa is standing trial on a 26-count charge of offering gratification to two judges of the Federal High Court – Justices Hyeladzira Nganjiwa and Mohammed Yunusa.

The charges include alleged perversion of the course of justice.

He, however, pleaded not guilty, and was granted bail on self-recognizance.

The case has been stalled since Jan. 21, following the SAN’s travel abroad for medical treatment.

When the case came up on March 11, March 19 and May 8, after he returned from abroad, the defendant was unable to enter the courtroom as he stayed downstairs in his car.

According to his counsel, Mr Jelili Owonikoko (SAN), Tarfa was unable to climb the staircase leading to Akintoye’s courtroom, even on a wheelchair, because of the severity of his ill-health.

On March 19, Owonikoko filed a medical recommendation from Tarfa’s doctors which stated that the defendant required a minimum of three months’ medical leave to recuperate.

On May 8, the judge held that Tarfa might be able to access a courtroom with minimal entry challenges, such as one on ground floor.

The judge adjourned the case to find a convenient courtroom to continue the trial.

On Friday, a space was provided for the case to continue in a courtroom on ground floor but Tarfa was not in the courtroom.

His counsel informed the court that Tarfa was outside in his car with his physiotherapist.

He told the court that he had filed an application seeking more time for Tarfa to recuperate.

“My lord, we have filed a motion challenging the application,” Buhari said.

In a ruling, the judge ordered that before Tarfa’s application could be heard, a medical report on his health which should be obtained from a general hospital or a teaching hospital, must be tendered before the court.

She adjourned further proceedings until June 21.

The anti-graft agency claimed that between June 27, 2012, and Jan. 8, 2016, Tarfa paid a total of N5.3 million in several tranches into Nganjiwa’s bank account.

The commission alleged that the payments were to make the judges to compromise standards.

The SAN was equally accused of age falsification.

The EFCC has since closed its case and Tarfa opened his defence after the court dismissed his no-case submission.