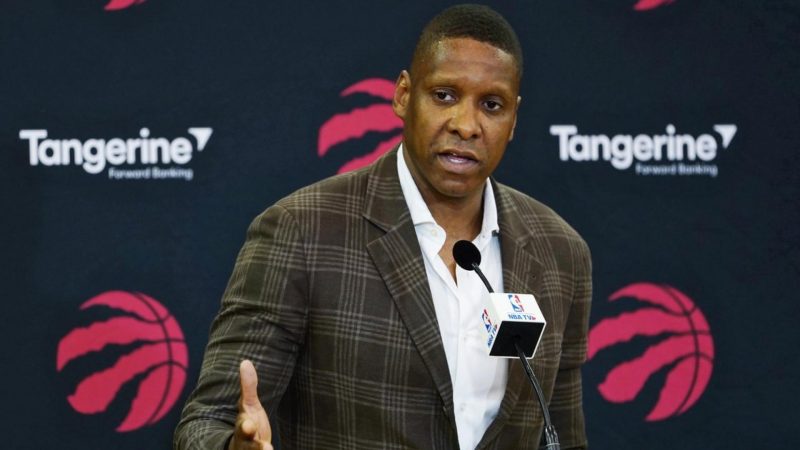 Masai Ujiri, who only discovered basketball as a teen growing up in Zaria, northern Nigeria, made the crucial decisions that lifted the Toronto Raptors from NBA disappointment to title contender.

“Caught a lot of us off guard,” said Raptors’ Cameroonian forward Pascal Siakam. “It was definitely something that was a tough pill to swallow.

“He’s willing to do anything he thinks is the best thing to put us in position to win. He’s going to do everything in his power to make us win.”

So far, Ujiri looks like a genius as the Raptors are facing defending champion Golden State in the best-of-seven NBA Finals, which opened on Thursday in Toronto.

“It’s surreal but when you put the team together, we all dream of a championship,” Ujiri said. “The change was hard at the time but we knew the kind of player we were getting and if we overcame and we dealt with all the issues that we felt that could come together.

“We were all positive about this kind of moment and all dreamed about it. Our job is to try and create that team, the atmosphere for them, the workplace for them to prepare and they have done an incredible job.”

Leonard has 31.2 points a game in the playoffs and has sparked the Raptors, his four-bounce buzzer beater in game seven to oust Philadelphia a clutch hoop like no other in NBA history.

Nurse has stamped his mark on the club as well, but Ujiri stressed that even absent, DeRozan and Casey deserved some of the credit for getting the Raptors into the first final of their 24-season history.

“To give Dwane Casey credit, he prepared us for this, too,” Ujiri said. “Dwane Casey and DeMar DeRozan are a part of this, part of our journey and how far this has come.

“Nick has done a great job just taking it from there and building his own identity and building a team that he wanted to coach in a certain way and bringing up us to this moment. He has made the right adjustments.”

The first NBA Finals games outside of the United States are in part a result of Ujiri’s moves in assembling a team with five players from outside US borders.

“This is what we dream of,” Ujiri said. “It’s overwhelming when I look at all the international players we have on our team, even the people on our staff, it has really brought us together.

“It says so much because that’s how our city is, how the country is. We can all relate to the multicultural or the diversity of Toronto and Canada and that’s how our team is.

“They talk in different languages on defense, in the locker room, and it’s like that in our organization. And being international myself and being from Africa, I’m proud of that.”

Ujiri was born in Bournemouth England to Nigerian students who moved back to Zaria in Nigeria, when Masai was two. He grew up in northern Nigeria and played football as a child until discovering basketball as a teen and finding an idol in Nigerian NBA star Hakeem Olajuwon.

Ujiri’s hospital administrator/nursing educator father was an Isoko from Aviara in Delta state while his doctor mother is Kenyan, of the Kamba people to be specific, from Machakos.

Ujiri went into scouting after his playing days and was hired by the Raptors as a global scouting director before becoming assistant general manager in 2008.

Two years later he went to Denver as director of basketball operations and in 2013 became the first non-American to be named NBA Executive of the Year.

In 2013, Ujiri returned to the Raptors as general manager and became team president three years later.