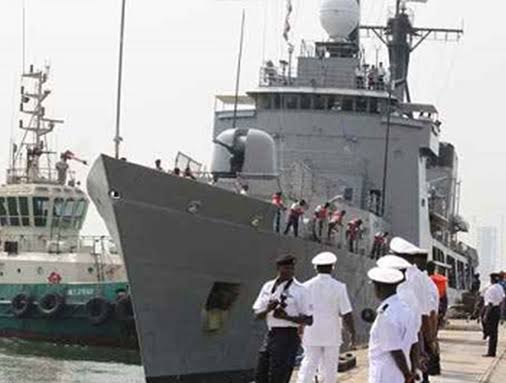 No fewer than 187 civilians from different parts of the country were thrilled at sea by the Nigerian Navy in Lagos in commemoration of its 63rd anniversary celebration.

The News Agency of Nigeria (NAN) reports that the civilians who thronged the Naval Dockyard Ltd. embarked on a trip to the high sea which ended late on Thursday with the members of the force.

The participating Ship, Nigerian Navy Ship (NNS) Unity, took the civilians round the Lagos waters and back to the dockyard.

The civilians came with their families to celebrate with the force on its anniversary.

The Fleet Commander, Western Fleet, Commodore Elkana Jaiyeola, while speaking with newsmen onboard NNS Unity, said that the trip was in commemoration of the Navy’s annual anniversary.

“As part of the Navy’s 63rd anniversary celebration, the essence of this sea trip is to take the civilians who are the stakeholders to sea so that they can have the experience of what the sailors face onboard.

“No matter the part of the country you come from, the essence is for everybody to felicitate with us,’’ he said.

The Commanding Officer of the Ship, Capt. Ani Oko, who also spoke with newsmen, said that it was a wonderful experience having civilians onboard.

“It’s not everyday we have civilians sailing with us to sea, so it is a good feeling.

“We have made good friends today and such relationship would be kept to further cement the civil-military relations we are trying to build.

“We have 187 civilians onboard and it is interesting to know that people want to know what the Navy do and also appreciating the kind of work we do while at sea, ‘’ Oko said.