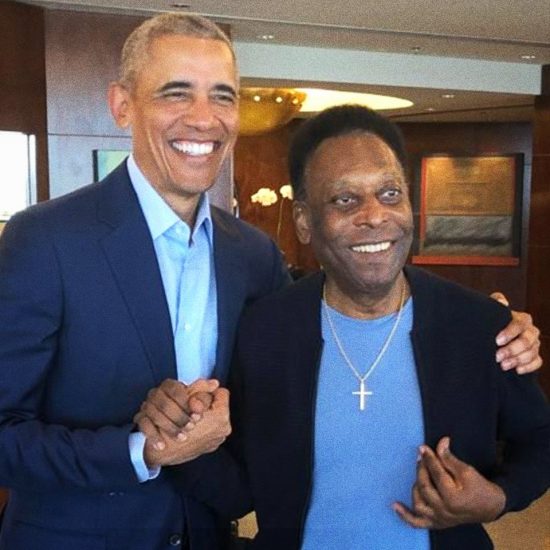 Obama and Pele in Sao Paulo in May 2019 . Photo credit Pele

Pele met with former US president Barack Obama in Sao Paulo Thursday where the pair discussed how “to make the world better,” the Brazilian football great said on Twitter.

Weeks after surgery to remove a kidney stone, a healthy-looking Pele smiled and clutched Obama’s hand as they posed for a photo, later shared on social media by the three-time World Cup winner.

“Met with President Obama while he was in town. We spoke about how to work together to make the world better,” Pele said.

“Happy we are on the same team.”

Met with President Obama while he was in town. We spoke about how to work together to make the world better. Happy we are on the same team. // Me encontrei com o @BarackObama. Nós falamos sobre como trabalharmos juntos para fazer o mundo melhor. Feliz por estarmos no mesmo time. pic.twitter.com/QEHbGsqNyP

Obama was in Sao Paulo for a digital innovation conference.

Pele, widely considered to be the greatest footballer in history, was admitted to a Paris hospital last month after appearing at a promotional event with France striker Kylian Mbappe.

He spent almost a week in the medical facility before returning to Sao Paulo, where he was admitted to another hospital for the kidney stone procedure.

Pele, who won the World Cup with Brazil in 1958, 1962 and perhaps most memorably in Mexico in 1970 when his swashbuckling team re-defined modern football, has had several health scares in recent years.