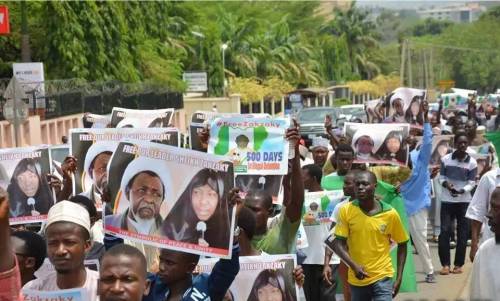 The Kaduna State Police Command, said it had arrested no fewer than 12 members of the Shi’a Islamic Movement in Nigeria, for allegedly staging unlawful procession in Kaduna.

The Command Public Public Relation Officer, DSP Yakubu Sabo told the NAN on Friday that the suspects conducted the act in spite of total ban on public procession imposed by the Kaduna State Government.

According to Sabo, the alleged illegal action took place at about 2:30pm along the central area of Kaduna metropolis.

“The command mobilized operatives to disperse the unlawful assembly, however, on sighting the Police, they instantly became riotous and started pelting the security agents with catapults, using some sharp lethal iron bolts to attack our operatives.

“This gives the impression that the procession was planned to be violent from the onset.

“The Police succeeded in dispersing the group and have arrested about a dozen who are now being investigated at the Command’s SCIID.

“We have maintained normalcy and will not allow any person or group of persons to take law into their hands,” he said.

He noted that the Kaduna state government had proscribed the organisation, as such “it is the responsibility of police as an enforcement agency to ensure compliance in accordance with the extant laws.”