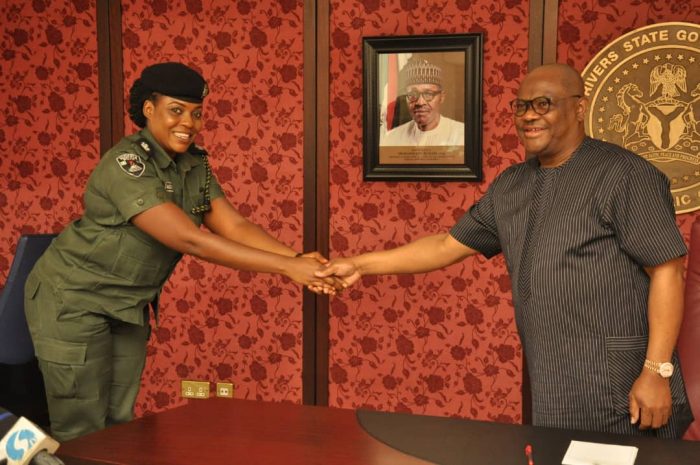 Wike shakes hand with the policewoman

Port Harcourt – Rivers State Governor, Nyesom Ezenwo Wike surprised the fermale Police Officer who commanded the parade for his second term inauguration, SP Komonbo Kate ,a Superintendent of of Police, SP, by splashing her with N5 million cash gift for her outstanding performance.

Speaking during a brief ceremony at the Government House, Port Harcourt, Wike expressed satisfaction with the capacity and commitment shown by the parade commander.

He said that the brief ceremony at the Government House, was aimed at recognizing her performance and to encourage other professionals to show commitment and capacity when detailed to carry out duties.

“This is to honour the lady who led that parade of our inauguration. What we saw that day shows commitment and capacity.

“I am happy that the police is being honoured for doing the right thing. We shall continue to encourage all committed workers”, he said.

“My joy knows no bounds. You have proved that eyes cannot miss an iota of excellence.