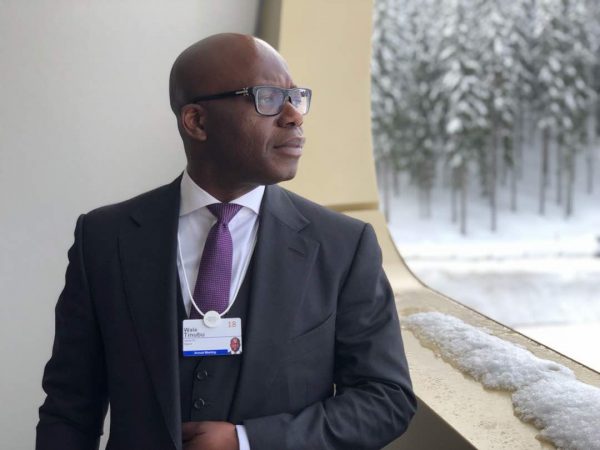 The Securities and Exchange Commission wielded the big hammer on Friday against Wale Tinubu, banning him and his deputy, Omamofe Boyo from being directors of any publicly quoted company for five years.

The duo were punished over infractions committed as leaders of oil and energy company, Oando Plc.

SEC also demanded the resignation of Tinubu and other board members and the convening of an extra-ordinary general meeting before July 1 to appoint new directors.

In addition, Oando and the board members will pay unspecified penalties and refund “improperly disbursed remuneration”.

Oando had been under the scrutiny of the SEC over allegations about the company’s huge debt and petitions by some shareholders over corporate governance..

One of the petitions was from businessman, Alhaji Dahiru Mangal, who claimed to have 17.9 per cent of the company. Oando claimed he has only 4 per cent and that he is yet to disclose the ownership of the remaining 13.9 per cent in compliance with Section 95 of the Companies and Allied Matters Act, Cap. C20 LFN 2004 (‘CAMA’). Under a settlement brokered by the Emir of Kano, Muhammadu Sanusi 11, Oando officially confirmed Mangal as a substantial shareholder.

Oando also stated that in addition, subject to the provisions of the SEC Code, Companies and Allied Matters Act (CAMA) and Oando’s board appointment process, its board of directors would consider the appointment of a representative for Mangal to the board.

“The representation will take the form of directorship from qualified individuals nominated by Alhaji Mangal. All Directors have a fiduciary duty to always act in the best interest of the Company and its stakeholders,” said the statement.

Another petitioner was the Italian businessman, Gabriele Volpi.Volpi who runs the troubled Intels in Nigeria claimed he invested in Oando via his company Ansbury Inc, by making equity contribution to Oando’s purchase of ConocoPhillips Nigeria assets.

Ansbury, Oando said, holds shares in a Nigerian investment company by the name of Ocean and Oil Development Partners (OODP) that is a shareholder in Oando PLC.

Both petitioners wanted to cash out from the company, but Oando refused to play ball, because the company is facing a serious financial crisis, occasioned by the big fall in oil prices, soon after it paid $800 million to buy ConocoPhillips in Nigeria.

SEC in 2018 said the commission carried out a comprehensive review of the petitions and found out the company allegedly breached the provisions of the Investments & Securities Act 2007.

It said Oando breached the SEC’s Code of Corporate Governance for Public Companies and was also guilty of suspected insider dealing.

“The Commission’s primary role as apex regulator of the Nigerian Capital Market is to regulate the market and protect the investing public.

Read the full statement by SEC:

Following the receipt of two petitions by the Commission in 2017, investigations were conducted into the activities of Oando Plc (a company listed on the Nigerian and Johannesburg Stock Exchanges). Certain infractions of Securities and other relevant laws were observed. The Commission further engaged Deloitte & Touche to conduct a Forensic Audit of the activities of Oando Plc.

The general public is hereby notified of the conclusion of the investigations of Oando Plc. The findings from the report revealed serious infractions such as false disclosures, market abuses, misstatements in financial statements, internal control failures, and corporate governance lapses stemming from poor board oversight, irregular approval of directors’ remuneration, unjustified disbursements to directors and management of the company, related party transactions not conducted at arm’s length, amongst others.

As part of measures to address these violations, the Commission has directed as follows:

Resignation of the affected Board members of Oando Plc,

The convening of an Extra-Ordinary General Meeting on or before July 1, 2019, to appoint new directors,

Payment of monetary penalties by the company and affected individuals and directors,

Refund of improperly disbursed remuneration by the affected Board members to the company,

As required under Section 304 of the Investments and Securities Act, (ISA) 2007, the Commission would refer all issues with possible criminality to the appropriate criminal prosecuting authorities. In addition, other aspects of the findings would be referred to the Nigerian Stock Exchange (NSE), Federal Inland Revenue Service (FIRS), and the Corporate Affairs Commission (CAC).

The Commission is confident that with the implementation of the above directives and introduction of some remedial measures, such unwholesome practices by public companies would be significantly reduced.

Therefore, in line with the Federal Government’s resolve to build strong institutions, Boards of public companies are enjoined to properly perform their fiduciary duties as required under extant securities laws.

The Commission, as the apex regulator of the Nigerian capital market, maintains its zero tolerance to market infractions, and reiterates its commitment to ensuring the fairness, integrity, efficiency and transparency of the securities market, thereby strengthening investor protection.
*UPdated