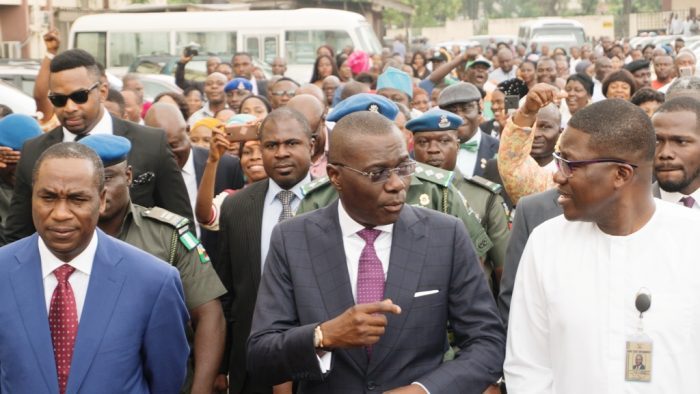 Governor of Lagos State, Mr Babajide Sanwo-Olu, on Friday said his administration would go back to the people of the state on whether to return the monthly sanitation exercise.

Sanwo-Olu said this during a visit to the Olusosun dumpsite in Ojota area of the state, in company with his deputy, Dr Obafemi Hamzat.

The State Government had in November 2016 cancelled the monthly environmental sanitation exercise held every last Saturday of the month.

The government had said it was no longer appropriate to restrict movement of people for three hours in a mega city like Lagos, at a time they should be pursuing commercial and entrepreneurial activities.

Sanwo-Olu, however, said there was the need to seek the opinion of Lagosians again on the issue.

“We are going to ask Lagosians if they want us to return the three- hour monthly sanitation to ensure we have cleaner city.

“Though I know what my own views are, but we will still need to ask Lagosians,” he said.

Lagos has in the recent past faced challenges of environmental sanitation, forcing the governor to sign an executive order on Thursday, a day after he was sworn in, to tackle the problem, among others.

According to Sanwo-Olu, 70 percent of refuse generated in Lagos is accommodated at the Olusosun dumpsite, and to create more jobs, the government will soon begin recycling the waste.

“Today, we came here to validate the executive order we signed. This is where we receive 70 percent of the waste in Lagos.

“The facility is 28 years old, so we want to ensure it can receive waste for the next 23 years.

“We want to see how we can improve the road condition, just so that the compactor trucks can have a quicker turnaround time.

“The building we are constructing at the entrance of the site will be used to train and retrain the staff and create jobs for more people.

“Half of the waste that comes here need not to be here, as they would have been recycled. Recycling is the way to go,” he said.

“We came here to show people we are not armchair politicians. We are going to create jobs here for people who have nothing doing.

“There is money in waste if properly harnessed. We are going to take back the pride of Lagos,” he said.