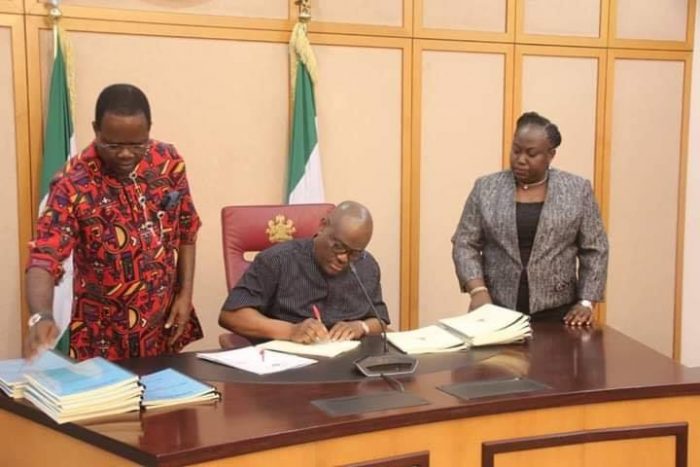 Rivers State Governor, Nyesom Ezenwo Wike has assented to four key bills passed by the State House of Assembly for the good governance of the State.

Wike said that the (No 3 of 2019), Rivers State Pension Reform Law (No 4 of 2019) will help in resolving the challenges generated by the Contributory Pension scheme.

He said that the State Government was committed to ensuring that civil servants and pensioners are catered for, with the challenges they faced completely addressed.

The Governor said that the Arbitration Law will help in the resolution of several legal conflicts without resorting to litigation.

He, however, informed that he is likely to seek an amendment of the Rivers State College of Health Sciences and Management Technology Law (No. 5 of 2019) because some stakeholders have raised concerns.

He commended the Rivers State House of Assembly for their commitment to the development of the State.

“If you are given the privilege to serve, put in your best for the people. These four years given to us , we will do more for our people.

“I urge the House of Assembly to continue to make laws for the development of Rivers State,” he said.

He called on the State House of Assembly to pass more bills during his second term.

“What you are doing for Rivers State serves as a beacon of hope for the present generation”, he said.

He said the goal of the State Assembly is Service to the people of Rivers State.

“In the Assembly, our goal is Service First . That is why you can assent to four Bill’s in one day”.