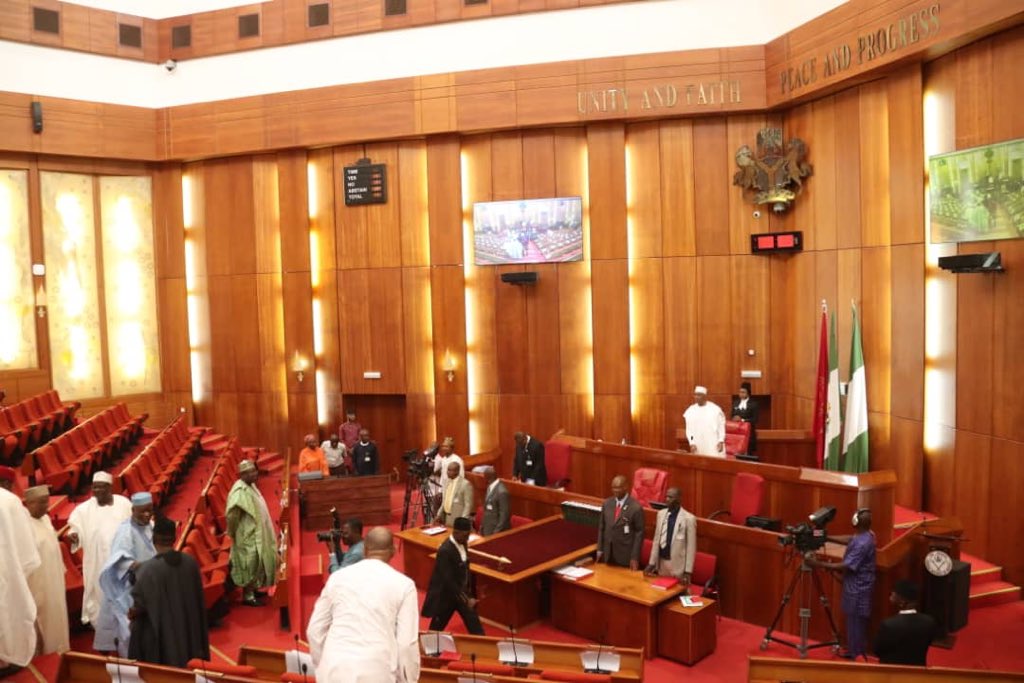 Senate during plenary session on Wednesday.

Ahead of the inauguration of the ninth National Assembly, the Transition Monitoring Group (TMG) has thrown its weight behind the clamour for adoption of open ballot for election of presiding officers.

Chairperson of TMG, a coalition of over 400 civil society organisations, Dr Abiola Akiyode-Afolabi, made the remark on Sunday in Abuja, NAN reports.

The clamour for adoption of open balloting against secret balloting for election of presiding officers in the ninth National Assembly has been gaining momentum among some of the elected lawmakers.

Akiyode-Afolabi, who said that open balloting is the most acceptable form of election in a popular democracy, said electorate should be able to stand by their votes.

”So I think open ballot system would have been the most ideal election,” she said.

She acknowledged that the lawmakers-elect might be opting for a secret ballot election because of the danger an open balloting could pose to their future relationship with colleagues.

”The open ballot system could also be dangerous to future relationship because a particular person failed to vote for you.

”We have not gotten to a level where our politics should be.

”Our politics is still very personal and very antagonistic, where criticism or opponent is not seen as a strong factor in moving us forward,” she said.

She said that if the National Assembly’s Standing Rules did not go against secret balloting and the lawmakers decided to go by the rules, no law would be breached.

”Since the rule allows for secret balloting or a discretion to be able to do either, so I don’t think they are running foul of any law or any of their procedures by going for the secret ballot,” she said.

Akiyode-Afolabi, however, stressed that ”to many Nigerians, an open ballot system would have been good.”

But Sen. Foster Ogola (PDP-Bayelsa), in a separate interview, disagreed with Akiyode-Afolabi, saying ”if any electoral system or voting system is to be credible or seen to be credible, it has to be secret ballot.”

According to him, that has been the pattern all along.

”And I believe that should stay; it should not be a controversy,” he said.

The lawmaker, who represents Bayelsa West Senatorial District, said ”if the election is secret ballot, it would be free and fair.”

”This is because the members of the National Assembly would be exercising their franchise freely, arising from their personal conscience.

”I believe in free thinking, I believe in republicanism; that people are free to have their minds, but I believe anybody who does not have ulterior motives, will support secret ballot,” he said.