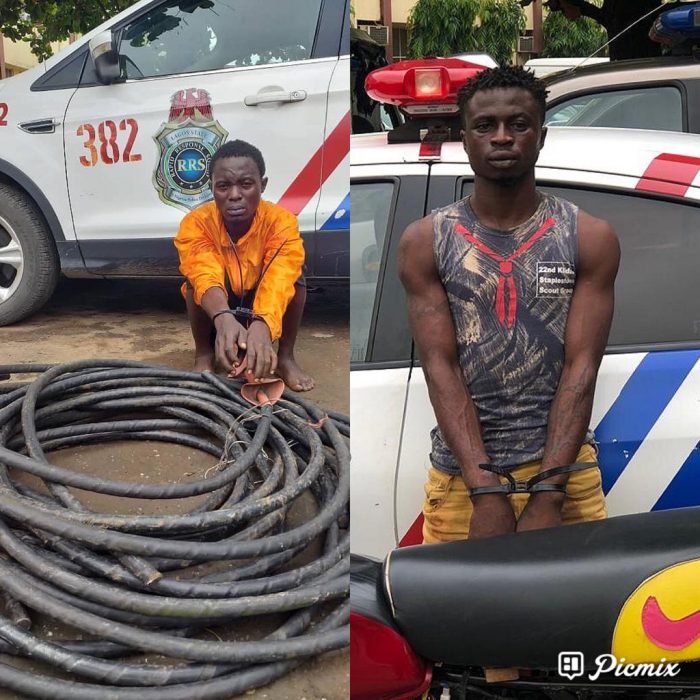 An armed robber operating on motorcycle, known as ‘okada’ in Ikorodu, Lagos State and a cable thief have been arrested separately by officials of the Lagos State Rapid Response Squad (RRS) in different parts of the state.

The robbery suspect, Sodiq Rasaq was arrested at Ijede Junction, Ikorodu when he was fleeing the scene of robbery incident.

The suspect, in company of an accomplice, Quadri Yusuph had robbed a ‘puff-puff’ seller around 5:00 a.m. and dispossessed him of N20,000 before fleeing. The duo thereafter stabbed their victim with dagger twice in the hand when he challenged them.

The suspects, having completed their mission fled the scene before their victim raised the alarm.

According to the victim, Ogbodo Chibuike, “two young men on okada stopped me that they wanted to buy puff – puff around 5:00 a.m, because they were of my age, I didn’t suspect anything. They bought puff-puff N200. They were to pay me and they refused, I challenged them, they alighted and stabbed me, took my wallet containing N20,000.

“I had to call for help when they stabbed me with knife. It was my noise that attracted people. Because they were on okada, those who came to my aid couldn’t chase them but some RRS officers on patrol chased them. They caught up with them at Ijede Junction and arrested one of them. The other escaped.”

The suspect disclosed to the police that it was their second operation for the day.

Meanwhile, a cable thief, Peter Abah, 32, was arrested almost same time on Mobolaji Johnson Road, Ikeja with the cables concealed inside a wheelbarrow.

The suspect, who was released from Badagry Prison in December, 2018 after being convicted for stealing Solar Panels, told the police that he, along with two others, now at large, severed the cable from a newly installed transformer in the area.

“We were three. We cut the cable from a transformer. We climbed the electric pole before removing the cables from It. I was just being unlucky. My colleagues’ names are Godwin and Zuma. We all connived to cut the upright cables, and we knew we could make something out of it to augment our salaries.”

Speaking on the development, the Commissioner of Police, Muazu Zubairu directed that all the fleeing suspects be arrested and the case transferred to SCID, Panti for further investigation.