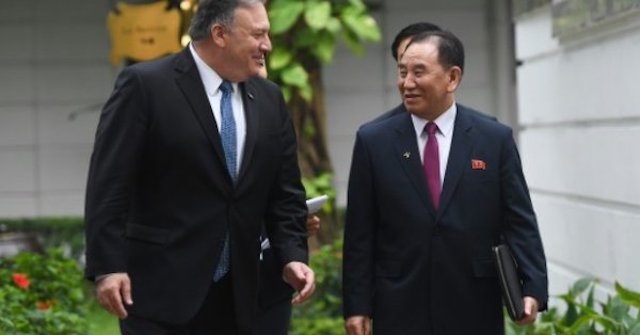 Kim Yong Chol, right, falsely reported to have been purged with Mike Pompeo

His appearance came just three days after he was said to have been purged, according to a report by a South Korean newspaper.

Kim Yong Chol, the North’s counterpart to Secretary of State Mike Pompeo in the nuclear negotiations, was sent to a labour camp after the Kim-Trump summit in Hanoi in February, South Korea’s Chosun Ilbo newspaper had reported Friday.

The paper had also made worldwide headlines by saying that Kim Hyok Chol, North Korea’s special envoy to the United States, had been executed by firing squad in March, after the two leaders failed to come to a deal over sanctions relief and the North’s nuclear programme.

Kim Hyok Chol was Pyongyang’s counterpart to US special representative Stephen Biegun in the run-up to Hanoi, and the Choson Ilbo said he had been put to death for “betraying the Supreme Leader” after he was “won over to the US” during pre-summit negotiations.

But the North is difficult to report on as one of the world’s most isolated nations and some previous Southern reports of purges and executions by Pyongyang have later proved inaccurate.

On Monday, the North’s official Rodong Sinmun newspaper carried a picture showing Kim Yong Chol sitting five seats down from North Korean leader Kim Jong Un, with both his hands covering his face, at a “performance given by amateur art groups of the wives” of military officers.

The South’s Munhwa Ilbo afternoon paper carried the photo on the front page of its Monday edition, with the headline: “Kim Yong Chol, rumoured to be purged, affirms his position next to Kim Jong Un”.