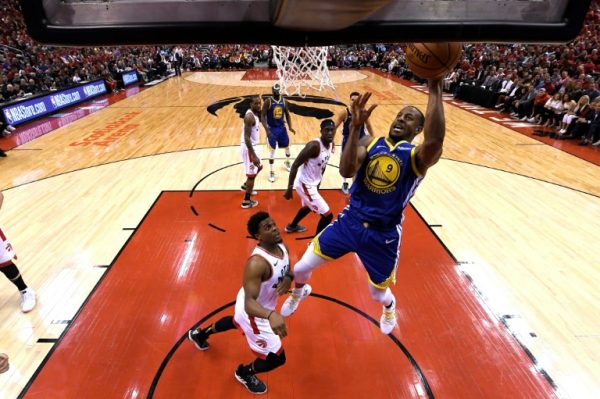 Defending Champions Golden State Warriors are now all square with Toronto Raptors as the NBA Finals go into Game 3 in California on Wednesday.

Andre Iguodala sank the game-clinching 3-pointer with seven seconds remaining to make the Warriors pull level with Toronto, by winning 109-104 on Sunday.

The Warriors, seeking a third consecutive title and fourth in five seasons, held off a late Raptors charge to even the best-of-seven series at 1-1 as the scene shifts to California for games three and four on Wednesday and Friday.

Golden State trailed by 12 points in the second quarter, but scored the first 18 points of the third quarter and led by as much as 72-59 before Toronto rallied late, holding the Warriors scoreless for more than 5:30 minutes down the stretch only to fall short.

“We did a great job physically, way better than the first game,” Warriors center DeMarcus Cousins said. “We’ve still got to correct some mistakes but a solid effort all around.”

Victory was vital for Golden State. Of 34 teams that fell behind 0-2 in the NBA Finals, only four rallied to win the crown.

The Warriors have now won at least once on the road in 23 consecutive playoff series.

Kyle Lowry and Danny Green made 3-pointers to pull the Raptors, in the first finals of their 24-season history, from a 13-point deficit to within 92-88 early in the fourth quarter.

But Quinn Cook answered with back-to-back 3-pointers to ignite a 14-6 Golden State run that stretched the Warriors’ lead to 106-94 with 5:39 to play.

Toronto trimmed it to 106-98 and Curry received a technical foul for an errant ball throw that set up three Leonard free throws, pulling the Raptors within 106-101 with 68 seconds remaining.

Early on, VanVleet had a back-to-back 3-pointer and 3-point play and Leonard added five points in a 20-7 Raptors run for Toronto’s biggest lead at 47-35.

But Curry, who missed his first six shots, scored 15 of the Warriors’ last 17 second-quarter points and Golden State trimmed the half-time deficit to 59-54.

Golden State opened the second half on an 18-0 run to seize a 72-59 lead, aided by the Raptors missing their first nine shots of the third quarter and committing seven turnovers in the pivotal span.

Thompson scored seven consecutive points and Iguodala, fighting a leg injury, added five in the crucial run over the first 5:30 of the second half.

The Warriors were again without top scorer Kevin Durant, but the forward is expected back soon after missing seven games with a right calf strain.

Curry’s run of six consecutive NBA playoff game with 30 or more points ended two shy of the record set by LeBron James against the Warriors in 2017.

Draymond Green was one assist shy of matching the NBA playoff record of four consecutive triple doubles and matching Wilt Chamberlain and Magic Johnson as the only players with back-to-back triple doubles in the NBA Finals.

Raptors rap-singer superfan Drake and former US President Barack Obama were among celebrities in attendance.

Drake was mellower after taunts or yells at Curry, Thompson and Green in the opener.