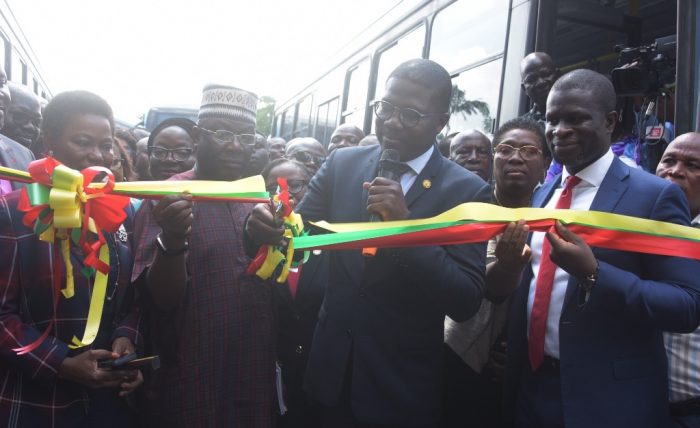 Lagos State Governor, Babajide Sanwo-Olu on Monday handed over 35 brand new buses to civil servants for transportation to and from work.

The governor had on resumption of office on Thursday promised to refleet the Central Bus System, CBS, the body handling transportation for civil servants, as almost all buses being used to convey civil servants to and from work were dilapidated.

Four days after the promise, Sanwo-Olu handed over the buses to the CBS on Monday at the Car Park, Lagos Government Secretariat, Alausa, in Ikeja, Lagos.

Head of Service, HoS, Hakeem Muri-Okunola commissioned the new buses and thanked the governor for catering for the welfare of about 120,000 workers.

Muri-Okunola stated that in line with Sanwo-Olu’s manifesto, he made good his promise by refleeting the entire CBS.

He said it was now a clarion call on civil servants to rededicate themselves to effectively service delivery.

“You cannot rely on bureaucracy but getting the job done, be ICT compliance. Join hands with the governor to build Lagos,” he said.

Muri-Okunola added the CBS drivers would have to undergo training to be able to drive the new buses as they were technical to operate than other buses.

He said the drivers would have to go to the Lagos State Drivers Institute, LASDRI for retraining and re-certification before they could drive the buses, saying that by next Monday, the buses would be put to full use.