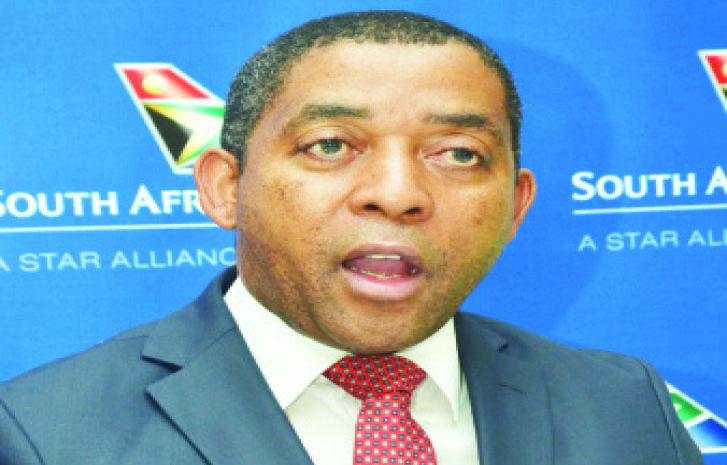 South African Airways’ CEO Vuyani Jarana has resigned after less than two years in the job, saying his turnaround strategy for the loss-making airline was being undermined by a lack of state funding and too much bureaucracy.

FILE PHOTO: Vuyani Jarana, SAA Group Chief Executive Officer, poses for a photograph next to a South African Airways logo in Johannesburg, South Africa February 18, 2019. REUTERS/Siphiwe Sibeko/File Photo
The airline said in a statement late on Sunday that its board had accepted Jarana’s resignation.

In a resignation letter dated May 29, Jarana told the chairman of the airline’s board that there was a lack of progress on implementing the group’s strategy.

“The strategy is being systematically undermined, and as the Group Chief Executive Officer, I can no longer be able to assure the board and the public that the LTTS (long-term turnaround strategy) is achievable,” Jarana said in his resignation letter.

His departure highlights the challenges facing South African President Cyril Ramaphosa as he seeks to speed up reforms at South African Airways (SAA) and other state-owned entities. They are dependent on government bailouts and are regularly cited by ratings agencies as one of the main threats to the country’s economic growth.

Jarana, a former executive at telecoms company Vodacom, was appointed in late 2017 to implement a strategy to return the airline to profit and wean it off government bailouts.

SAA, which has not made a profit since 2011, has drawn up a five-year turnaround plan that includes slashing costs and cancelling unprofitable routes as it grapples with cost increases that far outstrip revenue growth.

Jarana, in his resignation letter, said that in March 2018, the Treasury approved the airline’s turnaround plan, which required funding of 21.7 billion rand ($1.5 billion). Of that 9.2 billion rand was to cover old debt and 12.5 billion rand was for working capital requirements until 2021, he said, with the state providing the requisite funding as per the plan.

The government did inject 5 billion rand in the 2018/2019 financial year, with a big chunk of that used to fund creditors up to the end of March 2018, according to Jarana.