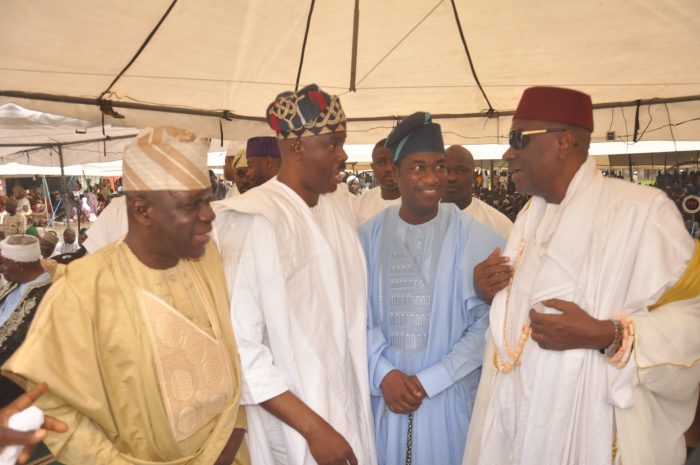 The Deputy Governor of Lagos State, Dr. Obafemi Hamzat, and the Chief Imam of Lagos, Sulaimon Abou-Nolla, on Tuesday urged Nigerians to desist from any act that could truncate the peace currently being experienced in the country.

They made the appeal after observing the Eid-il-Fitri prayer, which marks end of Ramadan fast, at the Dodan Barracks, Obalende, where he was joined by Oba of Lagos, Rilwan Akiolu; former Nigerian Ambassador to Ghana, Musiliu Obanikoro; Commissioner of Police, Zubair Muazu; former Federal Commissioner for Works, Alh. Femi Okunnu, and others.

Hamzat said that any violence or acrimony embarked upon under the pretext of Islam was false because the religion preached peaceful co-existence and tolerance but kicked against hostilities.

He frowned against any illicit act embarked upon under the pretext of religion, saying that one of the essences of Ramadan was for everyone to eschew violence and embrace “peaceful coexistence because there is one God and no one can fight for God. He can fight for himself.”

According to him, everyone must be fear God in whatever act they were doing because any act performed by anyone often had effect on others.

“We must use the Eid-il-fitri to renew our lives and live in peaceful way and realize that whatever we do has impact on others within the society. For instance, as residents of Lagos, we must not dispose waste indiscriminately because it will affect someone else’s health. So we must be considerate with other residents of the state,” he added.

According to him, “when you consider others in whatever act you engage in, it is believed that you have empathy for others.”

Earlier, Abou-Nolla, argued that Muslims must do away with any act considered by the government as illegal, such as kidnapping, banditry and others.