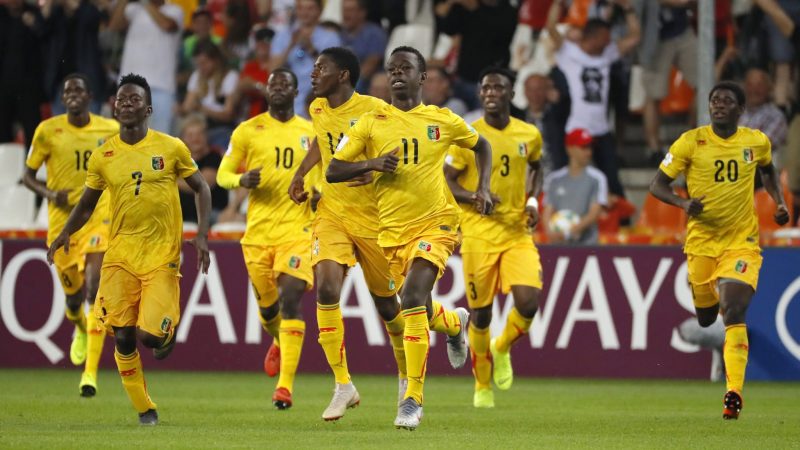 Jubilant Malian players after edging out Argentina on penalties

Mali beat Argentina 5-4 in penalty shootout to qualify for the quarterfinals of the U-20 FIFA World Cup in Poland.

Twice, the Malians came from behind to level scores with the Argentines. Argentina had led in the 49th minute with a goal by Adolfo Gaich,

But Abdoulaye Diaby equalized for Mali in the 67th minute to force an extra-time.

The Argentines led again in the first minute of extra time, with Diaby’s deflection giving them a goal. Ezequiel Barco influenced the go-ahead goal for Argentina less than 30 seconds into the first period of extra time. Francisco Ortega picked him out in space and Barco’s powerful first-time shot from 12 yards deflected off Diaby and into the net.

The hard fighting Malians equalized in the last minute.Mali caught Argentina sleeping at a set-piece right at the end to force a penalty shoot-out. Sekou Koita rolled the ball forward to Boubacar Konte, who aimed low toward the far post to beat Manuel Roffo.

The Malian keeper saved the second  Argentine spot kick , but the Malians scored all, thus edging out six-time champions Argentina. Mali’s players ran around the Bielsko-Biala Stadium in celebration after the winning penalty kick.

The Malians join Senegal, another West African team in the tournament. Senegal’s Young Teranga  Lions beat Nigeria’s Flying Eagles 2-1 on Monday in the Round of 16.

On Monday, Ukraine and Ecuador also qualified for the quarter-finals, while Italy and Colombia qualified on Sunday.

The Malians will next meet Italy on 7 June for a place in the semi-finals.