Why doctors are on warning strike in Anambra — MDCAN 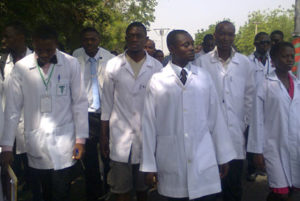 Dr Chukwudi Okani, Chairman of MDCAN, COOUTH, said in an interview in Awka on Tuesday that the industrial action would last for seven days.

Okani said that no fewer than 59 full time, honourary and part time Medical Consultants who work at the teaching hospital were among those who temporarily withdrew their services.

He said their demands were in line with that of the Association of Resident Doctors (ARD) at the institution who commenced indefinite strike on May 13.

Okani said the seven days warning strike would end on June 10 but added that the Consultants would commence indefinite strike after 21 days with effect from June 21 if their demand were not met.

The chairman said they were worried that three weeks after the ARD went on strike, there had not been noticeable signs that government was willing to address the issues that resulted to the industrial action.

“We have been working in a very precarious situation at COOUTH, where we have virtually a collapsed system, from simple diagnostic facilities to workers welfare which had been neglected.

“Due to the working conditions here, qualified doctors don’t come here to practice and those who agree to come, see COOUTH as a stop-gap where they can stay and look for something better, those of us here are mainly those who have their families here.

“Resident doctors went on strike since three weeks ago and instead of seeing moves and commitment by the government to address the issue, what we are seeing are threat of sack to those who joined the strike.

“Again, the challenges here affects everybody not just the resident doctors, so we are using this warning strike to further draw the attention of government to those demands.

“If nothing happens after 21 days, we shall embark on indefinite strike so that they can sack all of us,” he said.

He regretted the near shutdown of medical services at the teaching hospital occasioned by the strike, noting that it was avoidable but was not well managed.

He said the medical doctors started the agitation since December 2018 up till Jan. 17 when it reached an agreement that new conditions would be implemented effective from April 1.

He said the teaching hospital was not entirely profit oriented but an institution for taking care of patients, training of resident doctors and medical students as well as research activities.

“We are on minimum wage, there is a salary structure for doctors which Anambra government is implementing at between 37 to 40 per cent, and we are calling for full implementation.

“The present salary cannot support the system, brain drain is on the increase, we need diagnostic equipment and welfare for those that will man them,” he said.