At Eid-el-Fitri, Sanwo-Olu restates zero-tolerance, others 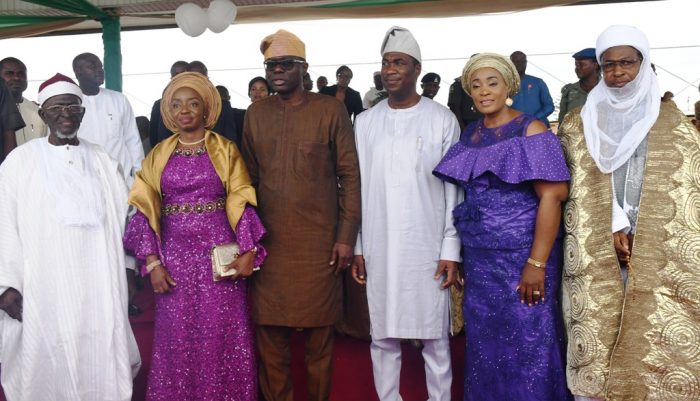 Governor Babajide Sanwo-Olu of Lagos State, has restated his administration’s zero-tolerance to traffic offences and indiscriminate waste disposal in the state.

He also hinted that the Public Works Bureau would soon begin fixing the pot-holes on Lagos roads.

The governor stated this at the eid-el-Fitri celebration held at the Lagos House, Alausa, Ikeja, where he feted Muslims upon successful completion of this year’s Ramadan fasting.

Sanwo-Olu, who lauded their self-discipline and spirit of endurance in the thirty-day fasting, urged them to not jettison the principles of the holy month, but to continue living according to the teachings of the prophet.

He said: ‘I am happy to be celebrating with you after the thirty-day fasting. Although this has taken something from you by way of self-denial but we thank Allah that you successfully completed the fasting. I thank you for your huge support that brought in our administration and I must tell you that it is your government because we will not disappoint you. However, I must restate that the administration will have zero-tolerance to traffic offences and indiscriminate waste disposal around the state. I urge everyone to join in the effort to move the state forward.”

Speaking further, he thanked Lagosians for their robust support that ensured his victory at the polls, promising that his administration would not disappoint them.

In her welcome address, his wife, Dr. Ibijoke, urged the  Muslim faithful to continue with the lofty virtues of Ramadan which include self-discipline, love for others, selflessness, piety and generosity, among others.

She noted that those were the sterling qualities of the holy prophet for which he lived, charging all adherents to emulate them, to access the full blessings of the special season.

According to her: “The important lessons for us to learn from this special season, have to do with the virtues of sacrifice, self-denial, piety, love and generosity among others. Through the Ramadan, we are taught to seek spiritual advancement and closeness to God, by stepping away from our comfort zone, where we indulge in various acts that please us as human beings but which are not acceptable to Allah.”

‘There is no doubt that we have tried so hard to stay away from many things in the last thirty days. What is by far more important however, is to keep our new form, by not returning to those old things and our old ways. This is the greatest lesson of Ramadan. When we have achieved this, then we have achieved the objectives of the season.’

Speaking further, she appealed to them, to allow the great principles reflect in all their actions, public conduct and inter-personal relations with neighbours, in their offices and with people of different ethnic groups, for enduring peace and harmony in the state.

A major highlight of the event was the quranic citation and quiz competition with prizes to winners.

In attendance at the event were the deputy-governor, Dr. Kadiri Hamzat and wife, chief Imam of Lagos Central Mosque, Sheik Sulaiman Oluwatoyin Abou-Nolla, women leader of the South West of the All Progressive Party, Chief Mrs. Kemi Nelson, top party members, head of service, body of permanent secretaries and others.