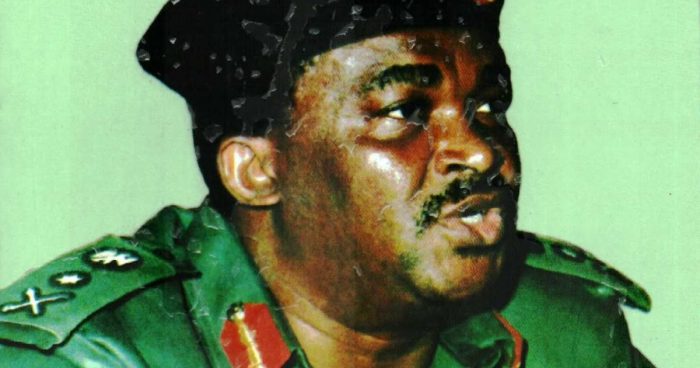 General Oladipo Diya, former Chief of General Staff, during the military reign of maximum ruler, General Sani Abacha, was present at the swearing in of President Muhammadu Buhari at Eagle Square in Abuja on 29 May. Despite that he was fighting a bout of flu (he was shown on TV with his inhaler), he made it to the ceremony, even while many former leaders were absent. That day, it was clear that age was setting in, the biological clock was ticking fast for a man who, by Providence, survived many attempts on his life.

There was a time during the Abacha years that a military plane that he was about to board, exploded while he was still on ground. No wonder, he celebrated his 75th birthday on Saturday 6 April.

Now that Nigeria’s Democracy Day has been shifted to 12 June, what Nigerians may have forgotten is that Diya should be among those to be honoured for his principled stand on the electoral mandate won by the late Chief MKO Abiola. Diya did that when he was Abacha’s number two man! As TheNEWS wrote in its 28 December 1998 edition:

“Abacha simply appropriated more powers as he fired the Chief of Naval Staff, Rear Admiral Allison Madueke. The consultation culture that prevailed within the Provisional Ruling Council vanished. Abacha become all in all. He made all the decisions. Diya and others, especially southerners were sidelined. The humbling of General Diya was underscored soon after, when the detention order for Chief MKO Abiola was brought for him to sign. He refused.

“And in 24 hours, an amendment to the decree (December of Persons Decree 2 of 1984) was made. The Inspector General of Police was given sweeping powers to invoke the decree and authorize detention of persons without application to any other authority. From then on, until he was ignominiously showed out, no such detention order, the sources confirmed, was ever brought to the CGS.”

It was because of this position and that Abacha wanted to transmogrify to life president of Nigeria that Diya whom he knew would stand against it, was targeted. He was tried for coup and sentenced to death. Fortunately for him, before his execution, Abacha died. Despite that, he was still in jail, awaiting the executioners. It was within that period that TheNEWS got certain facts from him in jail. The archival material is published below to mark his 75th birthday remember him as one of those who stood by the principles of June 12 for which the nation will roll out the drums next week.

My Story: Diya Speaks from Jail

A year ago, the army authorities announced, to the bewilderment of many Nigerians, that they had uncovered a coup plot, in which General Oladipo Diya, the Chief of General Staff, was a major actor. Now from trial records and intimate accounts of those close to this mother of all phantom coups,’ TheNEWS reconstructs the bizarre event

All was set for the 21 December, 1997 palace coup, take-over speech had been written and to care of the eventuality of maximum ruler, General Sani Abacha rejecting his forced retirement and attempting a consistence. Major General Ishaya Bamaiyi, the chief of army staff, had in his possession; four rapid fire machines guns (RPGs). Then, hour after hour of the morosely mournful disquieting martial music would have jangled and pierced the air waves, making Nigerians to huddle around every available radio set in near-quiet, restless anticipation with a sense of foreboding. Then, in the middle of it all, the national at hem would have been relayed and then:

‘’Fellow Nigerians, I Major-General Ishaya Bamaiyi of the  Nigerian army… hereby announce the resignation of General Sani Abacha, as Head of State and Commander-in-Chief of Armed Forces of the Federal Republic of Nigeria. The resignation is with immediate effect.’’