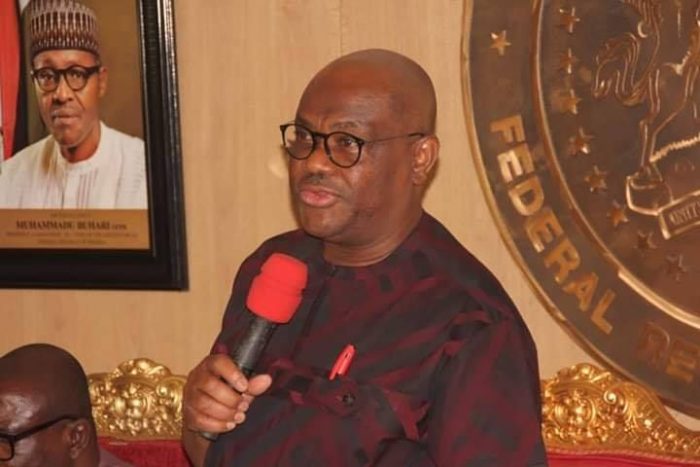 Rivers State Governor, Nyesom Ezenwo Wike has given hint on how his cabinet will look like in his second term.

The governor stated that his second term administration would feature leaders from within the State Structure, with a few new officials drawn from outside the system.

He said: “Most of you or some of you must still be part of the government , the cabinet and other parts of the administration.

“Those of you who are prayer warriors should continue to pray. Generally, it cannot be outside this area. It cannot be. It will be people within the system and some from outside.

“Don’t feel that we have abandoned you. Not at all. Government House is still open to you “.

He commended the Second Term Inauguration Committee for delivering a world class transition from first term to second term for his administration.

Wike expressed happiness that the committee worked religiously to deliver quality programmes that shaped the commencement of his second term.

“After the successful Second Term Inauguration, the Deputy Governor and I decided to host the committee for the wonderful inauguration.

“We were filled with happiness, particularly on the day of the second term inauguration. The only day we had a challenge was the day of the Thanksgiving Service. But the committee made amends”, he said.

Chairman of the Second Term inauguration Committee and Former Deputy Speaker of the House of Representatives, Rt Hon Austin Opara thanked the Rivers State Governor for the opportunity to serve the state.

He formally recommended all members of the Second Term Inauguration Committee for different responsibilities in the forthcoming administration, saying that they lived up expectations.

The Former Deputy Speaker of the House of Representatives thanked the Rivers State Governor for monitoring the preparations and activities of the committee, which ensured that the members delivered.

Professor Mrs. Ngozi Ordu on behalf of other committee members expressed gratitude to Governor Wike for the opportunity to serve. She said that members of the Second Term Inauguration Committee went the extra mile to ensure the transition into the second term was successful.