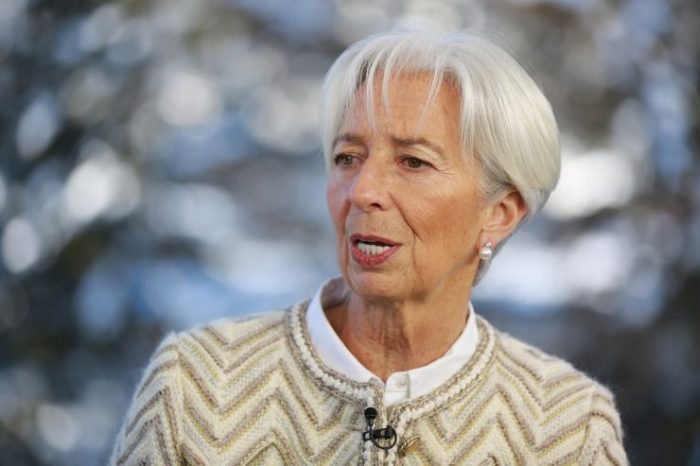 In a blog directed to G20 finance ministers meeting in Japan this week, Christine Lagarde warns about the effects of trade tensions on global growth and pointing out for instance that US-China tariffs—including those implemented last year—could reduce global GDP by 0.5 percent in 2020, a loss of about US$455 billion, larger than the size of South Africa’s economy.

As the G-20 finance ministers and central bank governors gather this week in Fukuoka, they can take inspiration from their host city. Known as Japan’s “startup city,” Fukuoka has flourished in recent decades by embracing trade, innovation, and openness.

That spirit is needed more than ever to help reduce trade tensions and clear other stumbling blocks on the way back to higher and more sustainable growth. The goal must be to help, not stand in the way of global growth.

In April, I described the global economy as being at a “delicate moment.” The IMF cut its global growth forecast to 3.3 percent in 2019, largely because of temporary, country-specific factors and the tangible effects of trade tensions. At the same time, we projected a pickup in growth in the second half of this year and a further acceleration to 3.6 percent in 2020, the same growth rate as in 2018.

Our expectation was that global economic activity would also benefit from the more patient pace of monetary normalization by the US Fed and the European Central Bank, and from increased fiscal stimulus in China. And indeed, these policy responses have provided vital support over the past few months, including by easing financial conditions and increasing capital flows to emerging markets.

In fact, the most recent economic data indicate that global growth may be stabilizing—broadly as we had forecast. For example, while first-quarter economic activity disappointed in parts of emerging Asia and Latin America, growth was stronger than expected in the United States, the euro area, and Japan.

So, there is some good news. Yet the road to stronger growth remains precarious. Why?

Let me highlight some of the significant stumbling blocks that could stand in the way of a rebound in growth:

For one, there are question marks over the expected uptick in growth. Will the first-quarter momentum in advanced economies hold up, and will the previously projected improvements in some stressed economies materialize or take longer than expected? How would a no-deal Brexit affect confidence? And will the recent increase in oil prices further depress economic activity?

Another stumbling block is the underlying vulnerability of the global economy. Corporate debt levels, for example, have increased to a point where a sudden shift in financial conditions could trigger disruptive capital outflows from emerging markets.

We also know that many economies are facing disappointing medium-term growth prospects, not just because of population aging and slow productivity, but also because of the corrosive effects of excessive economic inequality.

Most importantly, there are growing concerns over the impact of the current trade tensions. The risk is that the most recent US-China tariffs could further reduce investment, productivity, and growth. The just proposed US tariffs on Mexico are also of concern.

Indeed, there is strong evidence that the United States, China, and the world economy are the losers from the current trade tensions (see chart).

We estimate that the recently announced and envisaged US-China tariffs could subtract about 0.3 percent from global GDP in 2020, with more than half of the impact stemming from business confidence effects and negative financial market sentiment.

Overall, we estimate that US-China tariffs—including those implemented last year—could reduce global GDP by 0.5 percent in 2020 (see chart, bottom panel). This amounts to a loss of about US$455 billion, larger than the size of South Africa’s economy.

These are self-inflicted wounds that must be avoided. How? By removing the recently implemented trade barriers and by avoiding further barriers in whatever form.

The fact is that protectionist measures are not only hurting growth and jobs, but they are also making tradable consumer goods less affordable—and disproportionately harming low-income households.

So how can G-20 policymakers help to clear these stumbling blocks and support a rebound in growth?

The immediate priority is to resolve the current trade tensions, while stepping up the modernization of the international trade system. This includes building consensus across countries on how to strengthen WTO rules, especially on subsidies, intellectual property, and trade in services. The goal is to create a more open, more stable, and more transparent trade system—one that is well-equipped to serve the needs of 21st-century economies.

For example, IMF research shows that liberalizing trade in services could add about US$350 billion to global GDP in the long run. These types of gains are critical if trade is to play its role in lifting living standards and creating new jobs with higher wages.

As countries are fixing the trade system, they also need to work together to reform international corporate taxation, strengthen the global financial safety net, and tackle the existential threat of climate change.

At the same time, we have to recognize that high public debt and low interest rates have left many countries with limited policy room for maneuver. Managing this challenge will require carefully calibrated fiscal policies that strike the right balance between growth, debt sustainability, and social objectives.

We also need to address dislocations caused by trade and technological innovation, while doing more to support those left behind.

And we need further structural reforms: from lowering barriers to entry in retail and professional services, to encouraging greater participation of women in the workforce. Of course, each country will customize reforms to meet its needs—but we estimate that these types of measures, if jointly implemented, could boost G-20 GDP by 4 percent in the long term.

Even as we strive to support a pickup in growth in this way, countries need to ask, “what if?”

When the next downturn comes, which inevitably it will, policymakers may need to use all policy tools to maximize their combined effect. This means supporting demand through decisive monetary easing and fiscal stimulus wherever possible. It also means using these supportive policies to boost the impact of structural reforms where demand is weak.

Moreover, policy coordination should not stop at the border. Our downturn simulation shows that, if all countries act decisively to stimulate their own growth, the positive spillovers reinforce each other. And if everyone is working to expand growth, everyone benefits from the efforts of others to a much greater effect overall (see chart, bottom panel).

Of course, international cooperation is not just required in a potential downturn. It is critical right now because all countries continue to face a delicate moment. As the Japanese proverb goes: “Cross a shallow river as if it were deep.”

For the G-20 nations, crossing the river means working in partnership to help, not hinder the expected pickup in growth.

By harnessing the “Fukuoka spirit” of openness, policymakers can help remove the stumbling blocks and set the global economy on a more durable and inclusive path.