Why Buhari must intervene in Oshiomhole-Odigie-Oyegun hostilities 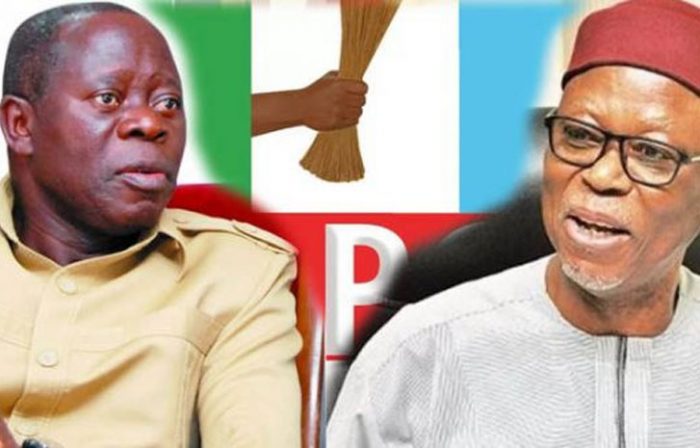 Mr Yekini Nabena, an All Progressives (APC) chieftain, has called on President Muhammadu Buhari, as the party’s leader, to intervene in the hostilities between Chief John Odigie-Oyegun, the party’s immediate past National chairman, and Mr Adams Oshiomhole, its current national chairman.

He made the call in a statement on Wednesday in Abuja, in reaction to the ongoing war of words between Odigie-Oyegun and Oshiomhole.

Following the party’s challenges in Zamfara and some other states of the federation resulting from its mode of primaries ahead of the 2019 general elections, Oshiomhole and Odigie-Oyegun had been engaged in blame trade.

This particularly followed the upturning of the party’s electoral victory in Zamfara by the Supreme Court, and the losses it suffered in some states it previously controlled.

However, Nabena who is also the APC Deputy National Publicity Secretary, said the war of words between Odigie-Oyegun and Oshiomhole, was unnecessary, describing the development as a distraction that could weaken the party.

“Elections have been won and lost, high-level meetings such as National Caucus and the National Executive Committee (NEC) are there to address party matters.

“I call on our respected leaders, particularly the current and immediate past national chairmen to end their public hostilities, particularly in the media,”he said.

Nabena said this was critical to ensure that the APC was focused on the important task of forming government at the state and federal levels, and to deliver on the Next Level mandate.

He stressed that the party needed a united house to grow and deliver on its campaign promises to Nigerians.

“In the immediate, I call on President Muhammadu Buhari, as the leader of our party, to lead fence-mending efforts and address obvious grievances in many states and among stakeholders in the party.

“The losses the APC suffered during the 2019 general elections in some states it previously controlled, is indeed worrisome.

“However, we are still the governing party which produced the President, control majority states and have an overwhelming majority in the National Assembly.

“Compared to the failed PDP, the APC remains the political party of choice for both Nigerians and politicians. I urge our aggrieved members to remain in the APC fold and settle their differences,” he said

He expressed optimism that in spite of the current situation in the APC, plans had been concluded by some members of the PDP and other political parties to defect to it in a few months time.