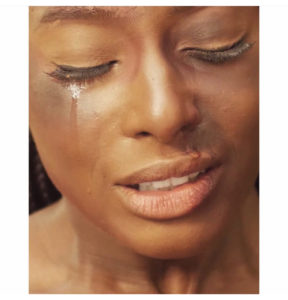 A still image from the short film

Fast-rising Nigerian actress and presenter, Dorcas Fapson, has trended on social media platforms following the release of her adaptation of Paulette Kelly’s poem, “I Got Flowers Today’’ (1992).

The News Agency of Nigeria (NAN) reports that the tragic poem preached against domestic violence, while chronicling the life and death of a woman in an abusive relationship.

The poems speaker noted that the victim received flowers only after she had been hurt by her partner.

“I got flowers today.
It wasn’t our anniversary or any other special day.
Last night, he threw me into a wall and started to choke me.
It seemed like a nightmare.
I couldn’t believe that it was real.
I woke up this morning sore and bruised all over.
I know he must be sorry.
Because he sent me flowers today,’’ read the second stanza.

It ended tragically as the last bouquet of flowers she got was at her funeral.

“I got flowers today. Today was a very special day. It was the day of my funeral. Last night he finally killed me. He beat me to death,’’ concluded the poem.

Fapson was applauded by Nigerians for the level of professionalism and depth the short film portrayed.

She said in an Instagram post: “I Got Flowers Today’’ is a poem by Paulette Kelly that I read years ago. I decided to develop and adapt it for the screen as it’s such an important message that hits home.

“I know victims of abuse that choose to stay for several reasons. I’m not here to judge because I know it’s hard.

“I need you to know that NO reason is worth your life. Even if this touches one person, I’m happy.”

Below are reactions of Nigerians to the adaptation:

@AminaJMohammed wrote, “No Woman Should Die Due to Her Gender! Let’s combat violence against women – family violence, sexual harassment & other forms of aggression in private & public spaces.”

@Ibraheemraji, “I’m impressed by this short film. No amount of presents is worth your life. Men or women who lay their hands on their partners are not worth your love.”

@Martinatayo , “Well, this is just a drama to drive home a vital point..if and only if we could model the creation of a more friendly environment devoid of violence and negative excesses that potentially eclipse happiness need of life..it could be significantly remarkable.”

The short movie has further sensitised women in abusive relationships on the need to stand and fight for what is right.

NAN reports that the cast of the short movie were Ghanaian actor, Mawuli Gavor and Dorcas Fapson herself.