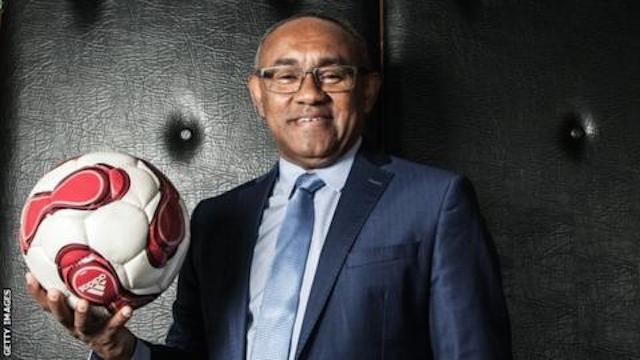 President, Confederation of African Football, CAF, Ahmad Ahmad has been arrested in France over a shady deal.

He was said to have been arrested around 8:30am at the Berri Hotel in Paris, according to several media reports.

His arrest was said to be based on issues relating to contractual matters with a Puma deal that was unilaterally abrogated in favour of another company.

According to Jeune Afrique, Ahmad would be heard by the services of the Central Office for the fight against corruption and financial and fiscal offenses.

It was gathered that his arrest was linked to the contract unilaterally broken by CAF with the German equipment manufacturer Puma to engage with the company Technical Steel, based in La Seyne-sur-Mer.

A signing of a contract which, according to the former Secretary General of the Continental Forum, Amr Fahmy, was favored by the proximity between Ahmad and one of the leaders of the French company, whose additional cost would reach 830 000 dollars (739 000 euros).

“All decisions were made collegially” and “transparent,” defended mid-April, the boss of African football.

The arrest comes as Ahmad was in Paris to attend the FIFA Congress, which resulted in the re-election of President Gianni Infantino.

FIFA has asked the French authorities for reasons for the arrest.

Ahmad, a former Malagasy cabinet minister, was reported last month to FIFA’s ethics committee for alleged corruption and sexual harassment by CAF general secretary Amr Fahmy, who was then fired.

Among the allegations are claims Ahmad forced CAF to buy sportswear through a French company rather than directly from manufacturers and at inflated prices.

“FIFA is unaware of the details surrounding this investigation and is therefore not in a position to make any comment on it specifically,” FIFA said in a statement.

“FIFA is asking the French authorities for any information that might be relevant to investigations taking place within its Ethics Committee”, it said.