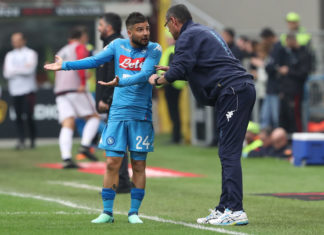 Napoli captain Lorenzo Insigne said Wednesday that Maurizio Sarri would be ‘betraying’ his former club should he agree to coach rivals Juventus.

Insigne played under Sarri at Napoli between 2015 and 2018, finishing twice runners-up in Serie A behind eight-time reigning champions Juventus.

“If Sarri went to Juve for us Neapolitans it would surely be a betrayal,” Insigne told a press conference with the Italian national team at Coverciano near Florence.

“Choosing Juve will hurt, but we must take note that the coach is a professional and in Naples, he gave his all.

“It is his own decision, but I hope in the end he will change his mind.” Under new coach Carlo Ancelotti the club once again finished runners-up behind Juventus, with their last Serie A title coming back in 1990.