Zverev can definitely give Djokovic a match - Boris Becker 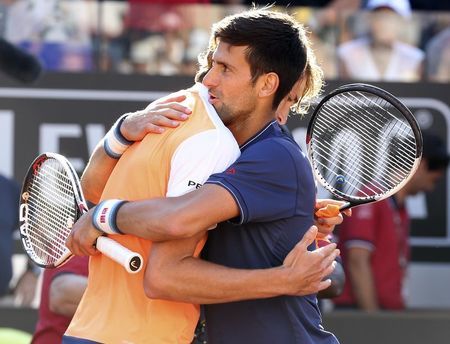 Djokovic and Zverev had been due to clash later on Wednesday in the top quarter-final, but persistent rain has meant no singles play has started, and it is looking increasingly unlikely that the pair will manage to play.

Becker, who coached Djokovic for three years, thinks his fellow German is primed to give him a run for his money.

“Djokovic has been in top form from the first round onwards,” said Becker, in the French capital as a pundit for Eurosport.

“He hasn’t been tested mainly because of his level. On the other hand, Sascha (Zverev) has been struggling with some long matches, with two five-setters, and for the first time, I saw a very good Sasha Zverev against (Fabio) Fognini.

“He really stepped up to the plate and maybe played his best match of the season, and that’s what he has to do to give Novak a run for his money.”

Becker, a champion at Wimbledon, the US and Australian Opens, never conquered the Paris clay, falling in the semi-finals three times.

He knows only too well the problems his compatriot might encounter. “Slow competitions don’t favour Zverev as it takes off a bit of speed from the serve, allowing Novak to get more returns,” he said.

“But in his last couple of matches, Zverev has been winning the longer rallies, he’s being more patient, waiting for the right moments to play the right shots, which I think you have to be against Novak.

“On paper, Novak is definitely the favourite, but on a good day, Sascha can definitely give him a match.”

Austrian Dominic Thiem was also due to play for a spot in the semis, facing Russia’s Karen Khachanov. The wet weather will favour Thiem, Becker says.

“Dominic Thiem’s run at the French Open in the last few years has been very impressive, but Khachanov is in his first ever Grand Slam quarter-final and an up-and-coming star, so can definitely cause problems.”

He beat (Juan Martin) Del Potro, one of the biggest hitters on the tour. He wasn’t fazed in that match at all.

“If it’s heavy and slow, it favours Thiem, but if it’s quick and the ball is travelling through the court fast, then it favours Khachanov. Thiem is still the favourite for me, but an intriguing match no doubt.”