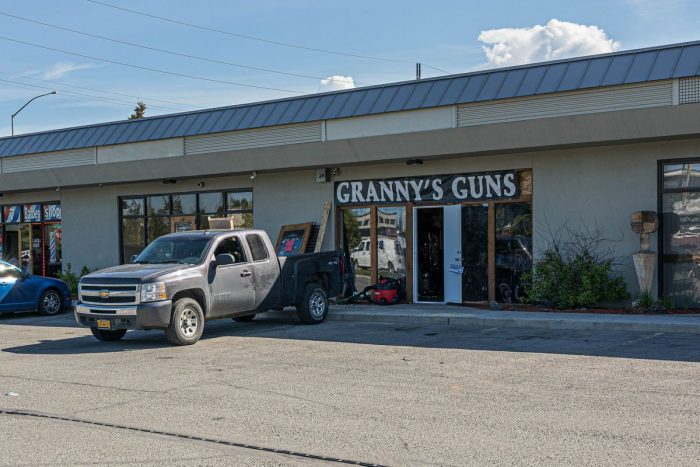 The looted gun store and the truck used to break-in

The Bureau of Alcohol, Tobacco, Firearms and Explosives said Friday that four suspects with their faces covered rammed through the front entrance of Granny’s Guns on Dowling Road around 3:59 a.m.

According to Anchorage Daily News, the thieves took at least 26 rifles and handguns, loading them into a separate vehicle before driving away. The vehicle they used to ram the store’s front doors was left at the scene, and the other was found later Thursday.

One of the suspects was described as wearing a blue long-sleeve shirt with a white cloth over nose and mouth. Another had dark pants, a dark long-sleeve shirt, a black vest and hoodie, and red shoes.

The third had gray pants, a white undershirt and a blue hoodie with the words “Bartlett 17” on the back. The fourth suspect was a passenger in one of the vehicles.

The ATF is offering a reward of up to $5,000 for information about the suspects or information that would lead investigators to the stolen firearms. The National Shooting Sports Foundation has offered to match that amount, for a total possible reward of $10,000.

The agency asked that anyone with information call 1-888-ATF-TIPS (888-283-8477), email [email protected], or contact ATF through its website at www.atf.gov/contact/atftips.