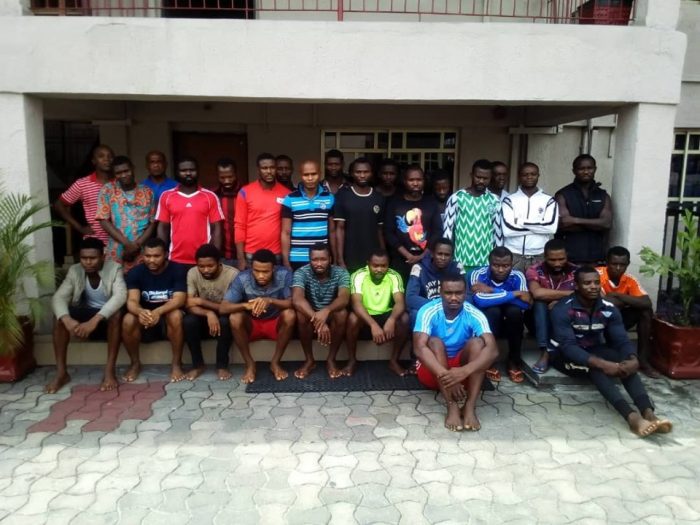 The Economic And Financial Crimes Commission, EFCC, Port Harcourt’s Zonal Office has commenced investigations into the activities of 29 suspected oil thieves alleged to be involved in illegal oil bunkering.

The Naval Handing over Officer, Lt. J. Mohammed said that the suspects were arrested between May 3, 2019 and May 6, 2019 at different locations.

According to Lt. Mohammed, a segment of the Nigerian Navy Team arrested 22 out of the 29 suspects around Bolo Creek near Onne, Rivers State on May 3, 2019.

They were arrested with 4 Vessels laden with indeterminate quantity of products suspected to be illegally refined AGO.

Three of the suspects were arrested along Hospital Road, Ikot- Abasi, Akwa- Ibom State and the remaining four suspects were crew of a Tugboat: MV LADY ESTHER arrested in the course of towing a confiscated Barge in Onne, Rivers State.

Principal Detective Superintendent Olayinka Macaulay who received the suspects and vessels on behalf of the EFCC, assured the Naval Handing over Officer and his team of diligent investigation and possible prosecution of the suspects as soon as investigations are concluded.