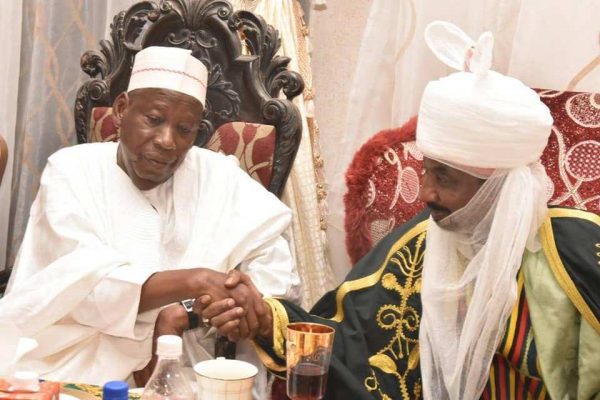 Kano residents have commended the reconciliation of Gov. Abdullahi Ganduje with the Emir of Kano, Malam Muhammadu Sanusi II by a committee initiated by Alhaji Aliko Dangote and Gov. Kayode Fayemi of Ekiti in Abuja on Friday.

Some residents, who spoke on Saturday in Kano, expressed satisfaction and appreciation with the reconciliation, NAN reports.

According to some of them, the reconciliation is in the best interest of peace in the state and the nation.

Dr Abba Ahmed, a retired civil servant in the state, said the reconciliation provided much relief to many residents.

“I have been tensed since the issue started, especially that I live close to the Emirate where people have developed a high sentiment over the situation.”

He explained that the situation was one of the few bad things that could happen to Kano, thus commended Dangote’s committee for the action.

Malam Nura Muhammad, also a civil servant, said that the reconciliation was timely as it would save the whole of Northern Nigeria a lot of trouble.

“Kano has indeed become a centre for democracy not only in the North but in the whole country and many states look up to it for new political strategies.

“It’s also a hub for traditional influence where the Emirate plays a vital role in global affairs, while the Emir himself has attracted global attention, ” he said.

Malam Muhammad Ahmad, a businessman, said the reconciliation has saved Kano from shame because of so many uncertainties that could arise if the whole process had continued.

He urged residents to keep praying for more peace in the state and the country at large and avoid developing sentiments and enmities on political issues.

Recall that the Kano State government on Thursday issued a query to the Emir of Kano over alleged misappropriation of N3.4 billion by the Emirate Council.