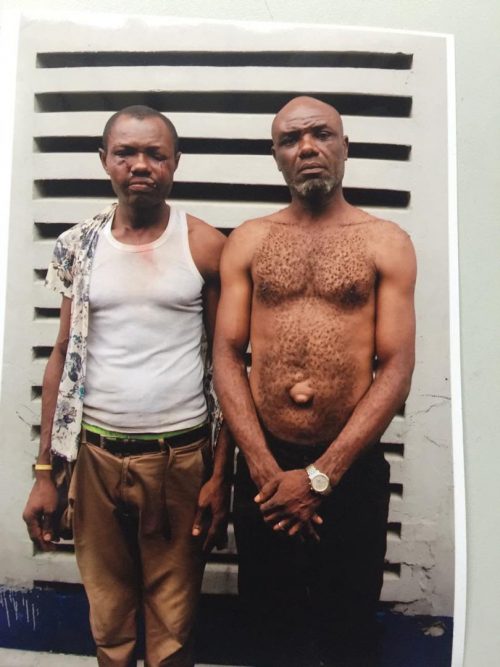 The Agugom brothers rescued by police in Lagos

The Lagos State Police Command has warned members of the public against executing jungle justice or extra-judicial punishment when suspected criminals are caught.

The victim, one Justina Emmanuel, who has mental health challenge, had shouted for help and a mob descended on her husband, Joseph Agugom and his brother, Paul Agugom who were taking her to the hospital, the police said.

“On June 6, at about 12.45p.m, the Command’s control room received a distress call that a mob action was going on at Lawanson junction, Itire.

According to him, One Justina Emmanuel of No. 10 Bishop Okogie St. Ago, and her one and a half year old daughter, Munachisom Agugom were rescued.

“Two suspects namely: Joseph Agugom and Paul Agugom both of the same address with the victims, were rescued from the mob.

“They were alleged to have kidnapped the victims for ritual purposes. One Honda CRV car with Lagos Registration FST 587 BU, one LG Phone, one iPhone, One bag containing two flasks, three pieces of rope, one black paramilitary belt and one green beret were recovered.

“Preliminary investigation revealed that the victim is married to one of the suspects, Joseph Agugom and the child belongs to both of them.

“It was also revealed that the victim is suffering from mental illness and she is being transported to hospital when she raised alarm and some members of the public stopped the car and descended on the suspects.

“Members of both the suspects’ and victims’ family came to the station and made statements to the effect that the victim is suffering from mental illness and was actually being transported to hospital.

“The two other children of the victim with her husband, were brought to the Station, contrary to the allegations of the victim that they were killed by the husband for money ritual.

“The victim was taken to hospital by the Police for medical examination.

“Police has launched a manhunt for those who participated in the mob action with a view to bringing them to justice,” he said.

Elkana strongly advised members of the public to be more careful and not to jump to conclusions on alarm raised by anybody.

He said innocent persons have suffered death or bodily harm and inhuman treatment through jungle justice in the past.

The PPRO added that members of the public have the powers to arrest anybody suspected of a crime but the law provides that such persons arrested should be handed over to the Police immediately.

According to him, it is only investigation that can determine the truthfulness or otherwise of the allegations and our laws presumes the accused person to be innocent until proven guilty by court of competent jurisdiction.