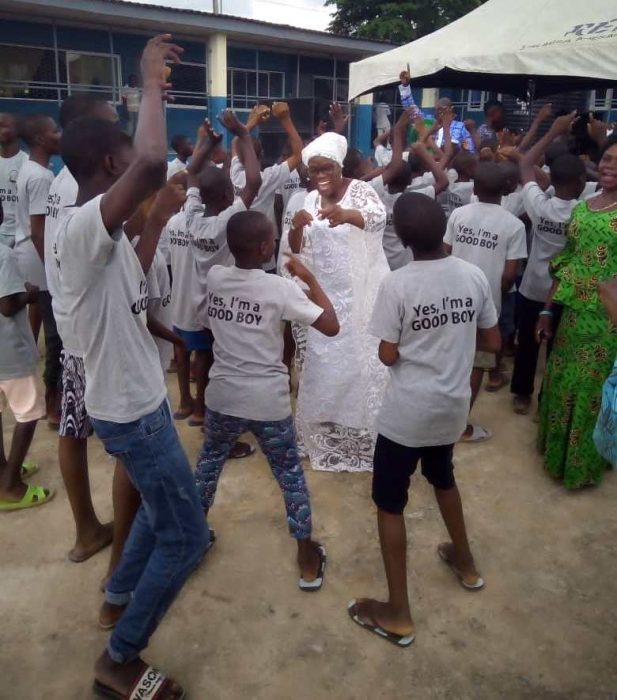 Obasa dancing with the boys

In a bid to help meet some of the physical and spiritual needs of wards at the Special Correctional Centre for Boys, Oregun, Ikeja, Lagos, a Non-Governmental Organisation, NGO, the Counselling Ambassadors Organisation, TCAO, has organised a one day musical concert tagged “BERACHAH” with the theme: Happy Day for them.

According to TCAO’s President, Pastor Iyabo Obasa, the provisions were made based on prior inquiries on the urgent needs of the Centre.

Obasa said: “we came with a lawn mower which the management of the centre told us they needed, we shared the word of God with the young boys who obviously need guidance, we provided counselling for some of them and also provided food items, exercise books and toiletries to improve their health, hygiene and general livelihood”

Obasa, who is a retired Permanent Secretary from the Lagos State Civil Service said the faith based NGO particularly chose to reach out to the boys at the Correctional Centre because of the believe that God could intervene in any situation and positively turn around the life of the boys who found themselves at the Centre because of juvenile delinquency and other anti-social behaviours.

She appealed to other well meaning Nigerians and corporate organizations, to complement government’s efforts to rehabilitate the boys.

“Government alone cannot do it, because of the pervasive issues of teens misbehaviour due to peer influence, pressure, marital breakups, domestic violence or financial instability, there is high rate of juvenile mishaps and criminal activities in the country, but we believe that God can take control over these young ones,” she said.

While thanking the organisation for reaching out, the Principal of the Centre, Mr. Abolaji Salawu explained that boys at the Correctional Centre were grouped into four distinct categories; those who ran-away from home and were picked up from the streets by the State’s taskforce; those who had conflict with the law and were brought to the Centre based on court orders/rulings; boys removed from volatile situations and natural disasters as well as those beyond parental control.

According to Salawu, the boys, aged between 10-17 years were given both the conventional and technical education in addition to psycho-social counseling to make them useful members of the society in future.

He said 165 boys were currently housed in the 170 capacity centre.