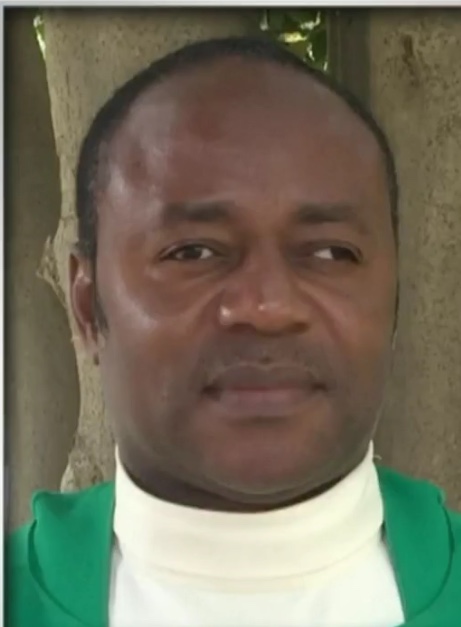 Father Cyprian Duru: banned from presenting himself as a priest

The Pittsburgh Diocese of the Catholic Church in the United States has suspended Nigerian priest Cyprian Duru from ministry, after accusation of rape and legal action by 68 year-old retired English teacher Kathy Coll.

In addition, he has been banned from presenting himself as a priest or wearing clerical garb.

Duru who is still a student at Duquesne University in Pittsburgh was however not charged criminally for the alleged rape in December 2016.

Coll in a legal suit details her account of how Duru — whom she agreed to tutor in English and occasionally transported to Pittsburgh — began taking frequent walks through her neighbourhood that fall. On Dec. 11, 2016, Coll said Duru stopped by her home on the pretence of giving her a Christmas card. She said when she offered him a cold drink, he followed her to her family room, overpowered her and assaulted her as she screamed for him to stop.

Since then, Coll has been trying to seek healing from the trauma of rape.

Triblive.com, a Pittsburgh newspaper said Coll, as part of the healing process, is planning to embark on a 250-mile trek on the Camino de Santiago, in the Spanish countryside on June 21. The trail is an ancient route pilgrims have endured for hundreds of years seeking wisdom and enlightenment.

The Spanish trip is the most recent leg of a pilgrimage that Coll, a lifelong Catholic, began as she worked to recover from a rape 2½ years ago she alleges at the hands of a priest from Nigeria who was assisting in her North Hills parish while studying at Duquesne University.

Coll said the shame, anxiety and depression were daunting.

“The hardest part was telling my pastor, who sat and cried with me and then notified the diocese,” Coll recalled.

Coll was disappointed that District Attorney Stephen Zappala’s office said prosecutors lacked sufficient evidence to pursue charges. But the retired high school English teacher said her biggest disappointment was learning that a church she continues to love and turned to for help had scant resources for abused women.

“There were visits by the (Pittsburgh) Diocese Trauma Team to my house offering prayer and help to find a therapist. But I found out they really don’t have anything for women who have been abused,” Coll said.

Coll said a therapist the diocese recommended within minutes of meeting her declared that she was depressed, anxious and suffering from PTSD.

“He said, ‘We’ll get you on medication and four or five sessions here, and you’ll be on your way.’ I walked out of there after 20 minutes and never went back,” she said.

Eventually, she found a therapist who helped her marshal her strength.

As she regained her footing in the world, the widowed mother of two adult sons resolved to do something to help others.

Last week, she went public with her story and asked others to share it.

She filed suit against the St. Teresa of Avila Roman Catholic Church, the Pittsburgh diocese and Bishop David Zubik. And she began speaking of her pilgrimage on the Camino de Santiago and plans for the SMG Catholic Women’s Support Group, a nonprofit for Catholic women who have been sexually abused.

She describes the outpouring of support she has received as overwhelming.

Friends and family members flocked to her Facebook page to salute her courage. Former students wrote of the impact a strong and loving teacher had had on their lives.

Coll said she is in the final stages of filing paperwork to register her group as a nonprofit with the IRS.

“I remember when I told my therapist, ‘I don’t want to be a victim. This man cannot be over me my whole life.’ He said, ‘You are always going to be a victim. How you handle it is how you become a survivor.’

“In advocating for myself, I realized I needed to advocate for others. I want to help other women to become survivors,” Coll said.

She said her son, Erik, who is in a graduate program in trauma nursing at UCLA, has been integral in the planning process for SMG.

Coll said she plans to share her story and post to Facebook as she treks on the Camino de Santiago with a group of 16 pilgrims. She hopes to raise seed money for the nonprofit through a GoFundMe campaign linked to the SMG Facebook page.

Through SMG, she will offer participants support and disciplines that helped her, such as yoga, writing in a journal, selected readings and prayers, aromatherapy, exercise and outdoor activities. She’s still looking for a certified therapist, psychologist and social worker to train facilitators for support group meetings.

“That’s going to take money, but I know we’ll find it. I couldn’t walk away from doing this,” Coll said. “I’ve been blessed throughout my whole life. I’ve never had any kind of trauma. I’m not going to say God picked me out, that this had to happen to me. But I think he gave me the gifts to handle it.”