We will fight till end, Falcons say after 0-3 drubbing by Norway 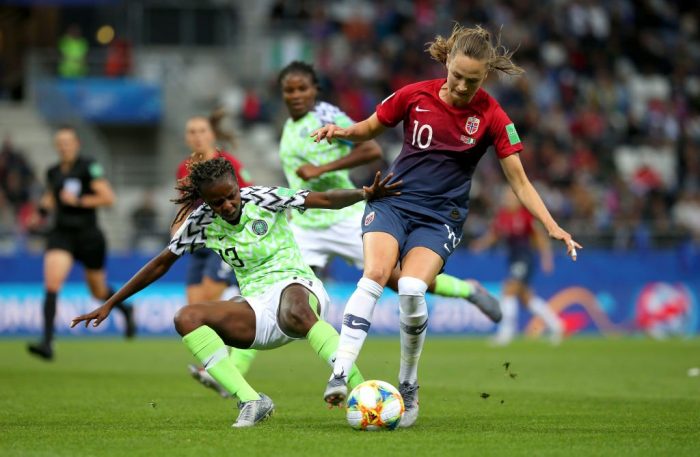 Super Falcons head coach Thomas Dennerby on Saturday in Reims assured that his team was going to fight till the end at France 2019 in spite of their opening match disappointment.

The Falcons were 0-3 losers to Norway in their opening Group A match at the ongoing FIFA Women’s World Cup in France.

Dennerby however assured immediately after the match, that the Nigerian senior national female football team were not going to give up in the attempt to better their best-ever mundial appearance.

“When it comes to sports, never ever give up. We have to fight for 180 minutes more, plus added time,’’ he said.

The Swede who led the team to their ninth African title at Ghana last November said every game was now going to matter.

They face South Korea and hosts France in their remaining group phase matches.

“A game can change in the last minute. So, we will work very hard for it and I can promise that we’ll never give up.”

Speaking also, Onome Ebi, one of the team’s veterans, said they were going back to make good use of the lessons learnt against Norway.

“We’re going to go back and look at our mistakes and maybe work on them. The second game will be better than the first.

“We’ve learned so much from this first game and we’ll come back. We have to win the second game (against Korea Republic), and we’ll do all we can to win,’’ she assured.

The 0-3 result was not the start the Super Falcons would have wanted, going by the way they came into the game.

This showed in the fact that, while they did not gain any point, there were some positive signs in the second half after Dennerby made half time tactical changes.

Ensuring during the second half that the scoreline remained no more than 3-0 at the end of the day was important, if you recall 1995 when Nigeria lost 0-8 to Norway.

And it was crucial to their chances against South Korea in Grenoble on Wednesday.

HOW THEY STAND IN GROUP A