How Abacha announced Buhari’s takeover in 1983 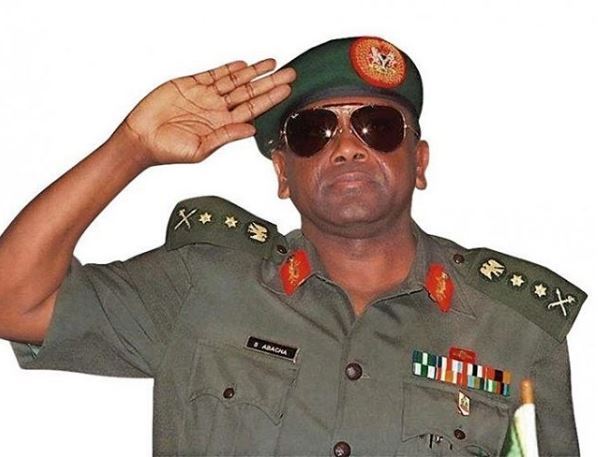 He was a man with peculiar history- he was a symbol of mutiny who announced overthrow of governments in Nigeria. He also symbolised public treasury looting in a proportion never seen in the history of Nigeria nay Africa. More than two decades after his demise, his loots, stashed in so many foreign accounts across the globe, are still being recovered.

On December 31, 1983, as a brigadier in Nigeria Army, he announced the overthrow of civilian government of Alhaji Sheu Shagari.

According to Osita Nwajah in PEOPLE IN TheNEWS: “His very graphic analysis of the problems besetting the nation struck the right chord in Nigerians. The association of his name with the disciplinarian, no-nonsense ‘rescue team’ of Buhari-Idiagbon, lent Abacha a measure of credibility in the public view. But he withdrew from the public glare to be General Officer- Commanding, 2 Mechanized Division, Ibadan.”

Major-General Buhari, who took over as Head of State and Commander-in-Chief of the Armed Forces of the Federal Republic of Nigeria after the overthrow of Sheu Shagari, promoted Abacha to major- general in 1984.

But, in a funny twist of event barely a year later, the new Major-General Abacha, was also among leading figures in the Military who overthrew his commander-in-chief and benefactor, General Muhammadu Buhari on 27 August 1985. The latter was detained for over two years by the succeeding government in which Abacha held strategic post of Chief of Army Staff and later Minister of Defence.

He would later, in another twist of event, appoint the same Buhari (now retired) in 1994 as Chairman of the Petroleum Trust Fund (PTF), after he (Abacha) had become the Head of State of the Federal Republic of Nigeria.

Abacha ironically wanted an impeccable hand with the required experience to head such a very juicy and strategic agency and finally settled for the retired general as the only one with such qualities at the time. Buhari served meritoriously on the board till 8 June 1998 when Abacha expired.

Abacha had, on 17 November 1993, forced the Head of Interim National Government (ING), Chief Ernest Shonekan, to resign and assumed the position of Head of State, Commander-in-Chief of the Armed Forces of the Federal Republic of Nigeria.

During his five-year rule, he maximally expressed dictatorial powers. He imprisoned, tortured and murdered anyone who challenged his authority. He rigorously pursued agenda to perpetuate himself in office.

Therefore, when it was clear he was not going to handover as expected to the acclaimed winner of June 12, 1993 Presidential Election, Chief Moshood Kasimawo Olawale Abiola, popularly called M.K.O Abiola (G.C.F.R), Nigerians nudged M.K.O to claim his mandate by declaring himself president.

Abiola yielded and the popular ‘Epetedo Declaration’ came into being. Abacha got infuriated and ordered arrest of the acclaimed President. He charged Abiola with ‘treasonable felony’ and caged him till both of them expired.

More on Abacha, such as the story of his dramatic marriage to Mariam; how he gaoled and, in some instances, exterminated real and imaginary enemies; the killing of Abiola’s irrepressible wife, Kudirat, on June 4, 1996; events leading to the maximum ruler’s death and how Nigerians reacted to announcement of his demise, are contained in a 500-page book of one hundred Nigerians who shaped the past, present and future of this country in the century (1900 – 1999) entitled: PEOPLE IN TheNEWS: A SURVEY OF NIGERIANS OF THE 20TH CENTURY published by the Independent Communications Network Limited in March year 2000.

On page 5 of the book, Osita concludes his story on the late dictator as follows: Abacha did not lay any claims to clairvoyance, but during the inauguration of his Provisional Ruling Council on 24 November 1993, he made a statement that is in retrospect, too perceptive to be ignored. “Some players bow out with boos while others do so with applause and leave (behind) a sense of nostalgia …”. Five years later, Abacha bowed out in ignominy, leaving in his wake a country in financial and moral ruins.