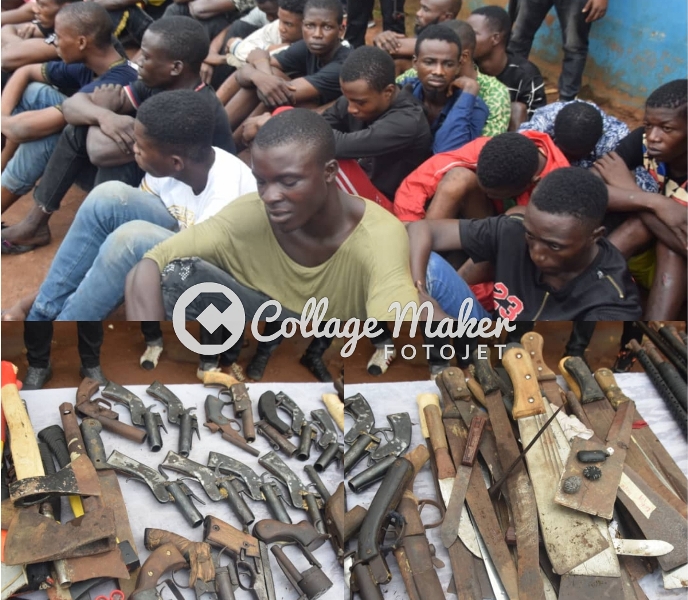 Suspected cultistsand ammunition recovered from them

The Lagos State Police Command on Monday said it has arrested 202 suspected cult members in various parts of the state.

The police also launched ‘Operation Crush’ aimed at at ending cultism and gangsterism in Lagos State.

State Commissioner of Police, Zubairu Muazu, at a news conference said from February, 2019 since he assumed duty, the Command had arrested 202 notorious cult members and that they had been charged to Court, saying that the cases were at different stages of prosecution.

The commissioner added that the command recovered 54 assorted weapons from the cultists.

“Other successes recorded by the Command include the arrest of 105 suspects for armed robbery and 7 suspects for kidnapping. The Command has also successfully foiled 93 armed robbery attempts through prompt response to distress calls from members of the public at different locations in the state,” he said.

“We will soon embark on sensitization programmes in collaboration with Police Community Relations Committee and other stakeholders in Schools, Neighborhoods and Media. We will equally establish Police Students Relations Committee, comprising all the Students Union Presidents and other Students leaders. We will organize town hall meetings in areas mostly affected by cult activities. The meetings will discuss extensively, the root causes of cultism and gangsterism in the affected areas and the possible solutions.

“We have observed the activities of those cult groups and gangs for the last one month and credible intelligence was gathered. We have reviewed our strategies and have initiated far reaching approach to totally eradicate this menace. We have rejig our Anti Cultism Unit to effectively combat those miscreants who have chosen the wrong path of life.  We are taking the fight to their door steps, we are all out for them. We will fish them out, isolate them and bring them to justice. We are battle ready to uproot every cultists den and hideouts until they are totally defeated.

“This Special operation we are flagging off today, is code named ‘Operation Crush’ aimed at ending Cultism and Gangsterism in Lagos State and it will be directly under my command. Area Commanders and Divisional Police Officers will personally lead the various operations in their areas of jurisdiction,” he stated.

Muazu warned members of those gangs and cult groups to either renounce membership of such cults and gangs or be prepared to face the full weight of the law.

“This is a promise. And to parents and guardians of those youths, my message is simple, monitor the activities and movements of your children and wards and make sure that their mission on the public space are legitimate otherwise, they should stay clear.

“Let me call on everyone, both old and young, rich and poor to join us in this noble fight. We must cleanse our communities of those few criminal elements who have threatened our social and economic well-being. Together we can subdue them,” he said.